"Death is always on the way, but the fact that you don't know when it will arrive seems to take away from the finiteness of life. It's that terrible precision that we hate so much. But because we don't know, we get to think of life as an inexhaustible well. Yet everything happens only a certain number of times, and a very small number, really. How many more times will you remember a certain afternoon of your childhood, some afternoon that's so deeply a part of your being that you can't even conceive of your life without it? Perhaps four or five times more. Perhaps not even that. How many more times will you watch the full moon rise? Perhaps twenty. And yet it all seems limitless." 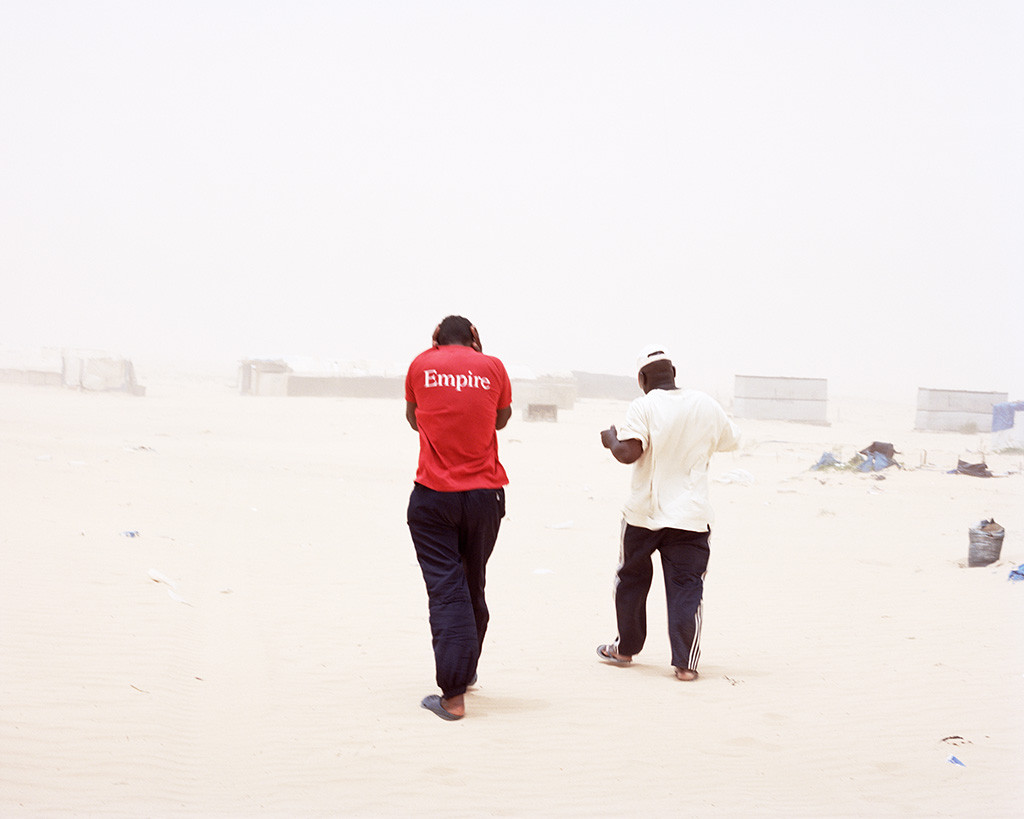 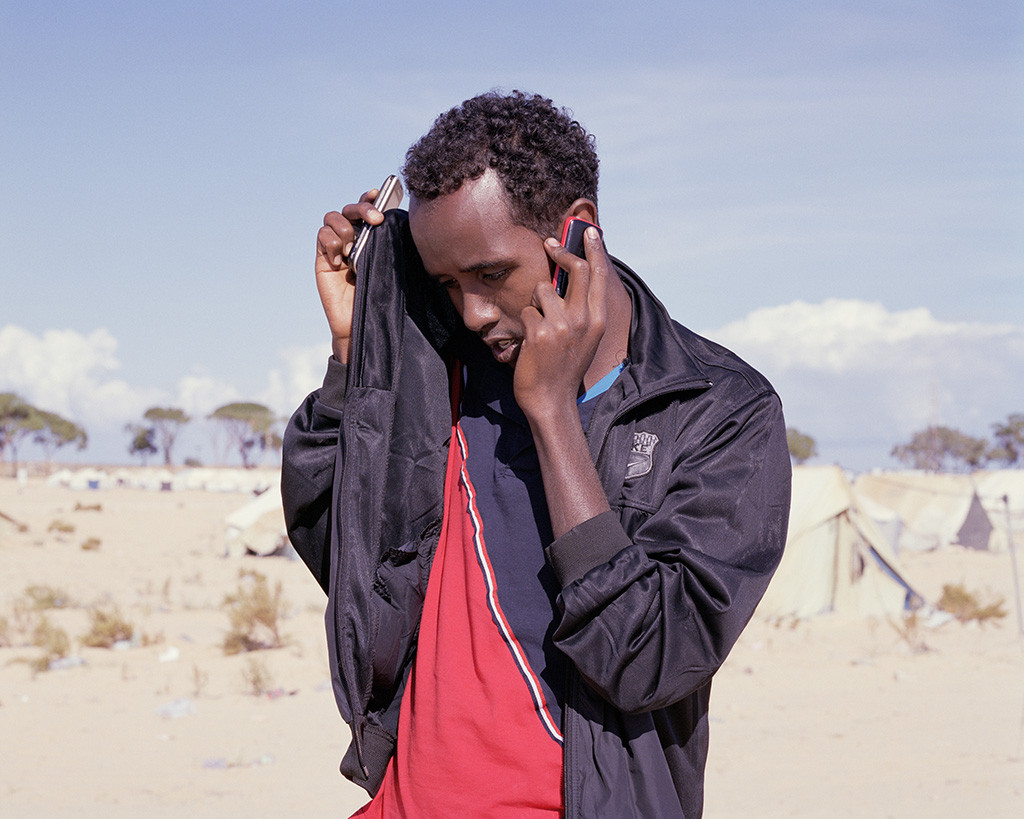 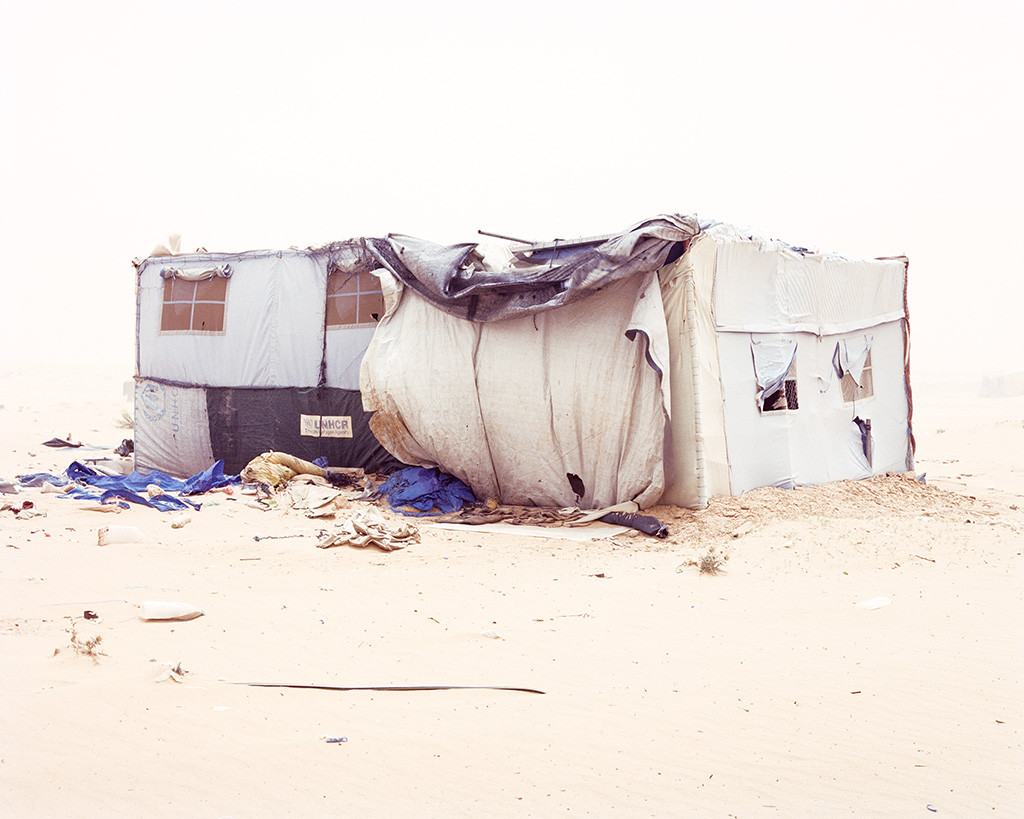 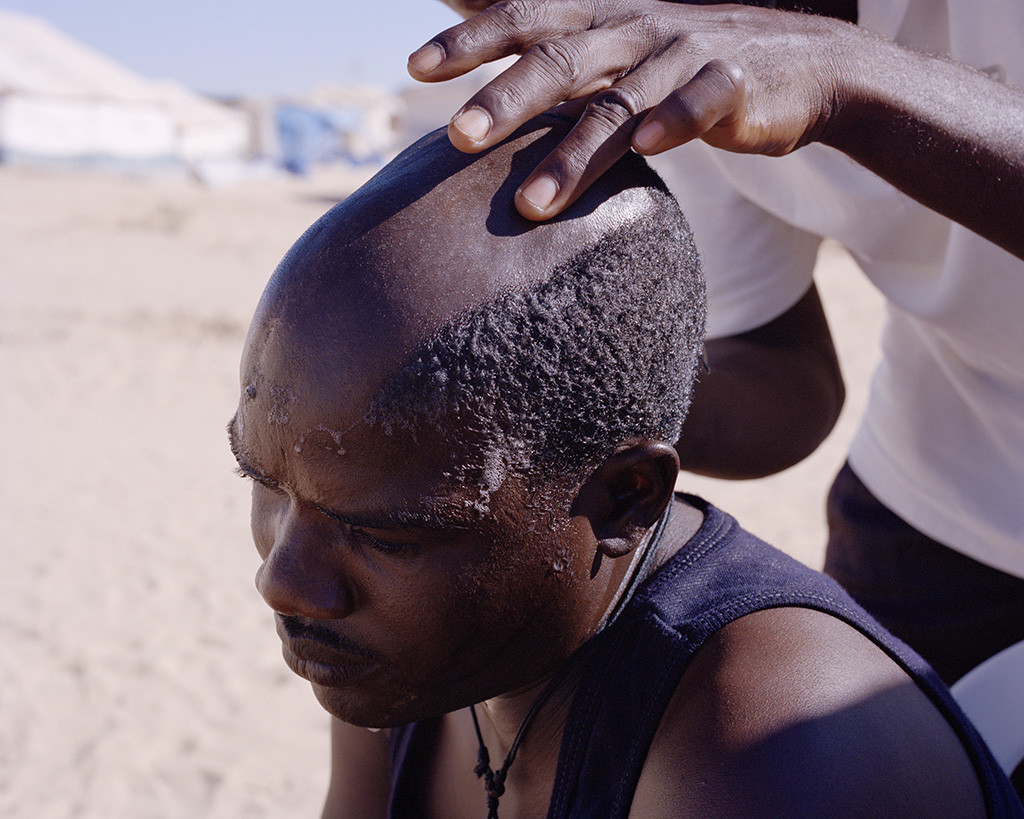 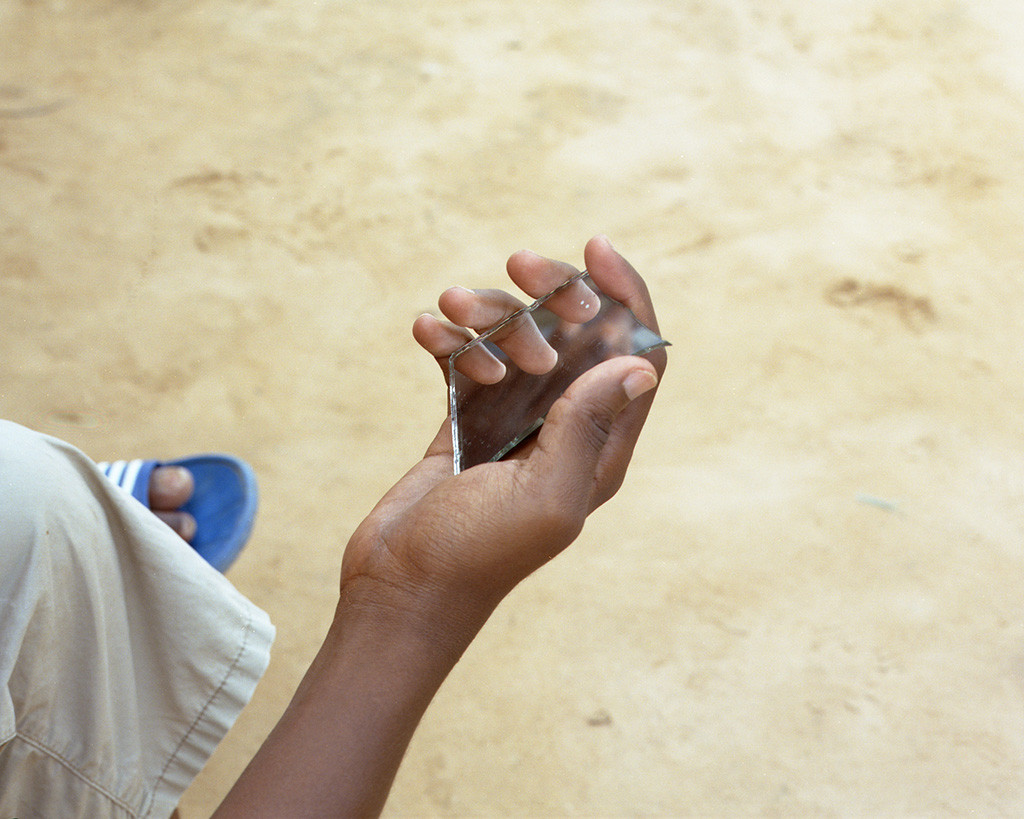 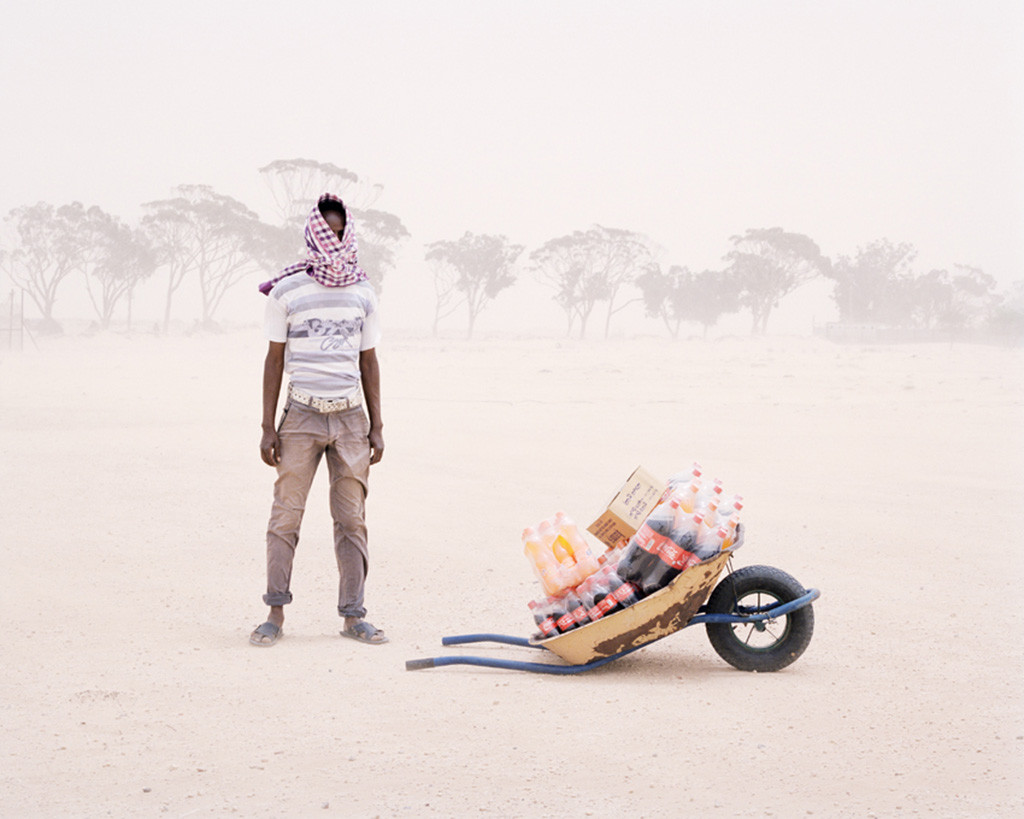 Choucha: a refugee camp located in Tunisia, 5 kilometers from the border post with Libya and about twenty kilometers from the city of Ben Guerdane. Founded in February 2011, several hundred thousand refugees were in transit there during the Libyan civil war and the NATO attacks. While Libyan refugees are welcomed into Tunisian families and settle temporarily in Tunis or in the camp of Remada, the refugees of Sub-Saharan origin go to Choucha. I first went there in January 2012, to accompany a reporter. Confronted with the rules of short-term reporting, I had to cope with the complex reality of the camp and with my own difficulties to render an image. I then decided to return in July 2012 so as to start a photography and video documentary project.

The first image: a moving, uneasy to capture and distant image. Then, beginning to focus: I gradually move in closer to people. The image is first evasive; I find it perhaps too obvious and not right enough. I have a hard time taking pictures for the first two months. I just can’t bring myself to do it. Images will follow later. From day to day, I try to understand: how to speak about the hostility of this place, of its abandonment and of the loss of identity? This frustration quickly transforms itself into the desire to capture, as closely as possible, the issues of the construction of this place with its rules and organization.

One day, a man calls me  in front of other refugees; he wants to speak, to cry out his despair and that of those around him. I listen to him, but I don’t understand because he talks about things I have not yet identified in Choucha: the humanitarian organizations, the UNHCR* (*the UN Refugee Agency), the “rejections”, the asylum, the waiting, the junk food, the climate, the insecurity…and the media no longer coming. I was looking for answers and he brought new questions.

This man asks me what I am doing here, and if I am a reporter: “Reporters came over a year ago and then nothing more, we are disappearing into oblivion. Women, men, children are suffering here. What are you doing? What are the people responsible doing?…”. One year after the opening of the camp in January 2011, after the Libyan “crisis” and the death of Khadafi in October 2011, the media was way less interested in the fate of refugees. All of them felt abandoned. The man continues to speak and quickly nearly twenty people gather around him… His eyes express tiredness, incomprehension. I can only acquiesce and he goes on his way, then the group of people disperses. I’ve recorded and photographed nothing. Only the mental image of the scenery and the man.

The first image is that of a place dominated by light and wind, a fragment of a Tunisian desert. Some silhouettes, inhabitants of this temporary living place, some ghostly and distant appearances. One of my first photographs is the one of a Chadian man holding at arm’s length a piece of an A4 sheet of paper: it’s a confirmation of the final rejection of his request for refugee status – REJECTED. It’s an image, and he offers it to me. This man’s life and future lie on this piece of paper. A number and a bureaucratic language have destroyed it all. His gesture of protest, this very gesture of handing me this piece of paper, is a manifest gesture. This is what I have been searching for in photography ever since.

The refugees from the Côte d’Ivoire welcomed me into the camp. Diarra, then Amidou and all the community opened their doors to me. Our exchange grew richer for two years in a specific area of the camp carrying the letter E. The people, whose right to asylum had been rejected, were confined there in this area: all the Western African communities, and Chadians, Sudanese, Iraqis, Palestinians, and one Bangladeshi family.

I give introductory photography courses on the basis of a volunteer project with an NGO. This allows me to be present every day in the camp which was under the administrative authority of the UNHCR and the Tunisian military security authorities. I was allowed to teach photography to adolescents, but in reality I did not teach them anything. I would provide them with traditional photography supplies. They were free to take whichever images they wanted to.

The authorization to photograph only gave me access to a part of the story, a fragmented reality. So, I started drawing a map, as if I was apologizing for being there. I wanted to depict this part of Tunisian territory that would certainly never be found on any map of any kind, ever. A place of living created from nothing: a road, with sand all around and five kilometers from Libya. A place overexposed to light and with people underexposed in the media. The refugees of Choucha – men, women and children – were living a double penalty, enduring the end of a conflict and left out for three years since the opening of the camp.

The map is a topographical plan roughly drawn in pencil and composed of A4 sheets of paper taped together. I made two maps, one in July 2012, and the other one six months later. In the meantime the number of tents had diminished.

How could one represent such a territory in constant recomposition? The (un)usefulness of this map ? A document pierced with a loss of information, whose only legend is a date. A twist of fate occurred: I entered the camp by the road situated at the North, I therefore drew this map as I was going to the South. A relation North-South inverted. I am a layman cartographer.

Choucha, January 2014, women and children are begging for water and food while men struggle to find jobs in the city of Ben Guerdane. I did not come back to the camp since July 2013, I knew that the humanitarian organizations had left but I had no idea of the consequences.

The wind is sweeping everything away

Today, in 2015, those who stayed still don’t want to be in Choucha. They still do not want this “Empire” and would like to protest. But, what is the point of protesting in the middle of the desert? The wind is sweeping everything away.
The connection to time is no longer the same, the days are pointless. The sand destroys everything and cracks the fabric of the tents that are too fragile.

The families left the camp at the beginning of the year 2014. They went back to Libya to reach Italy by sea.

“Four years in Choucha, and you end up transforming yourself into an old man”, Amidou once said to me. Some have gone mad.

“God is strong”: these words echoed in the camp. Men are also strong, those who do not give in, nor give up. 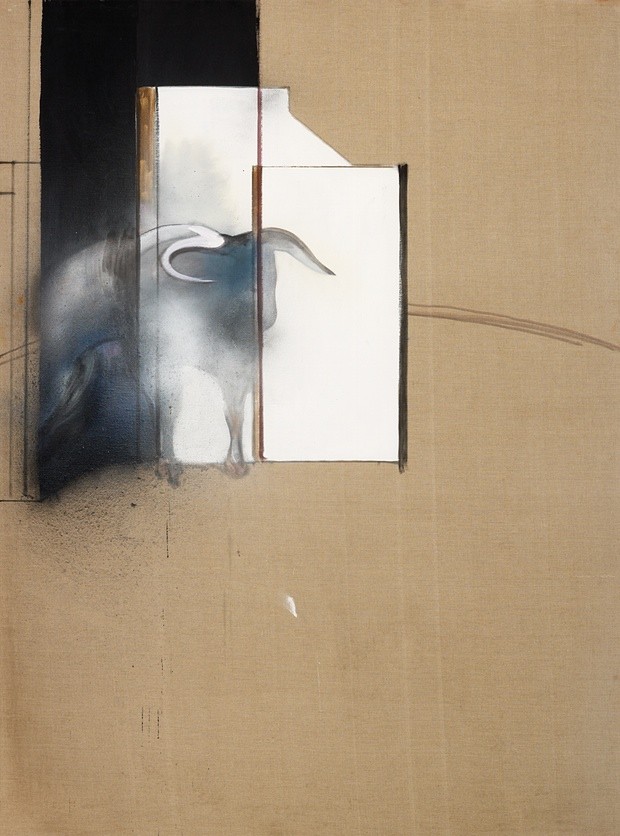