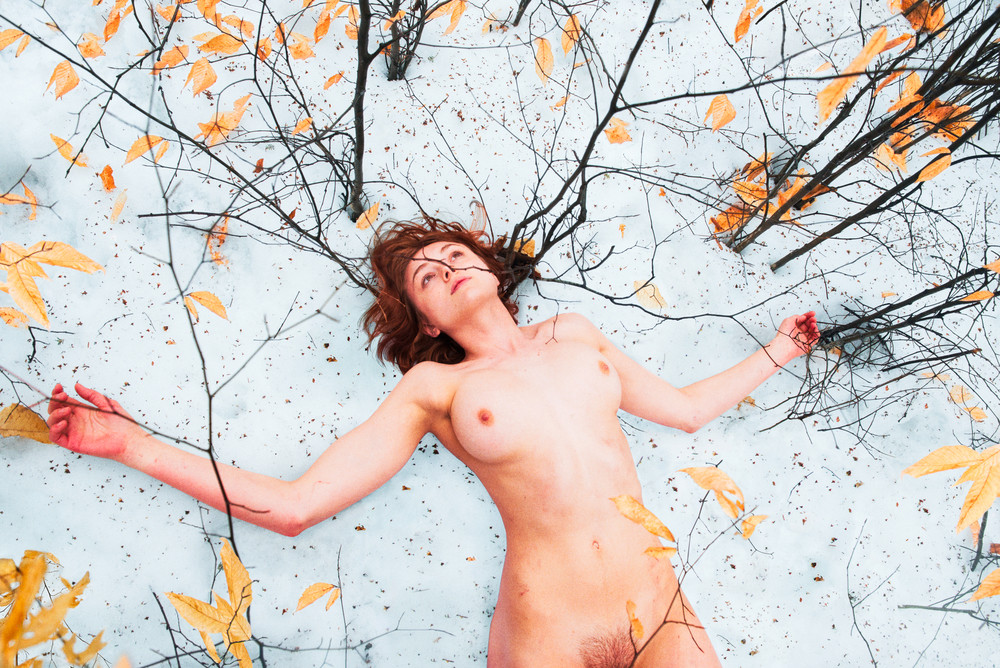 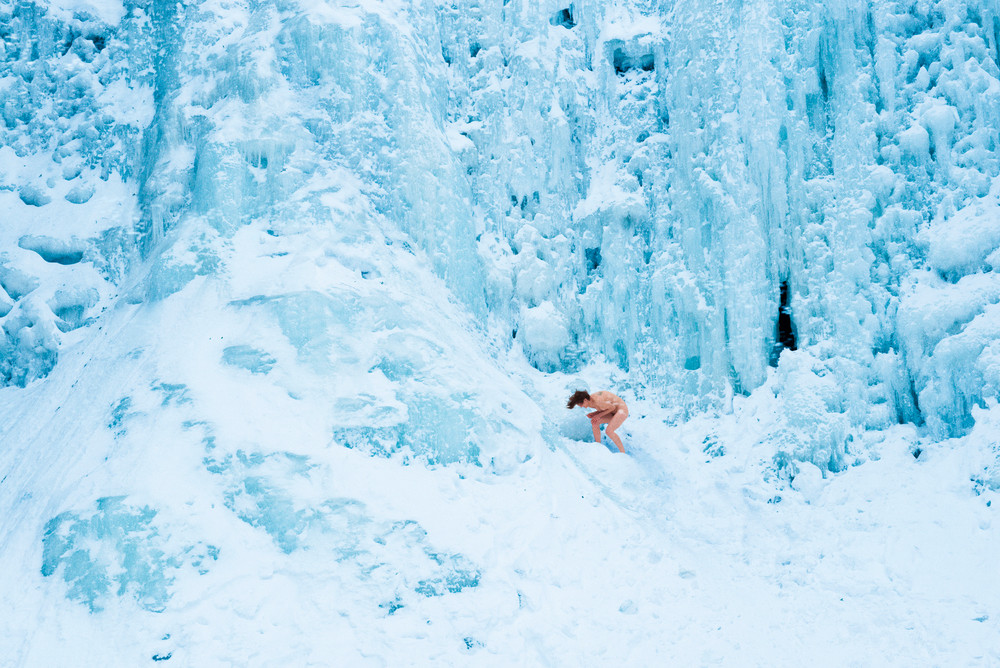 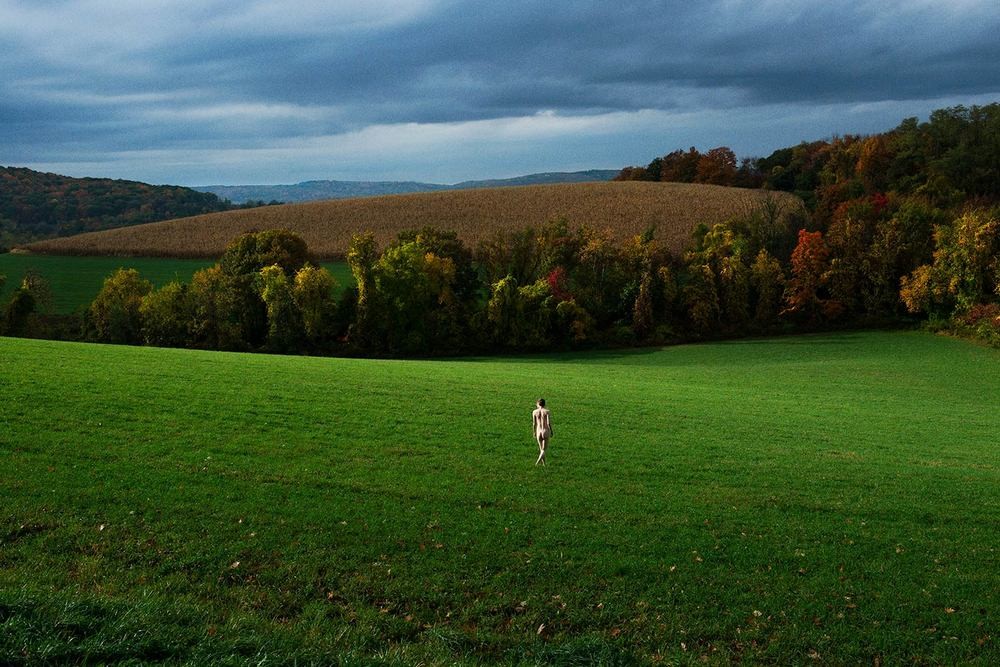 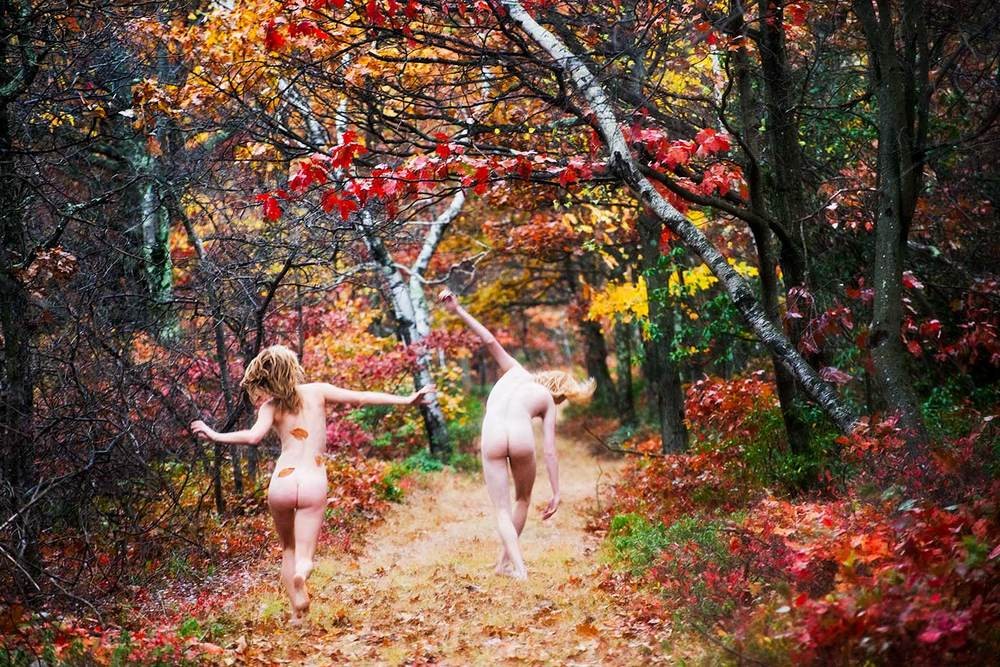 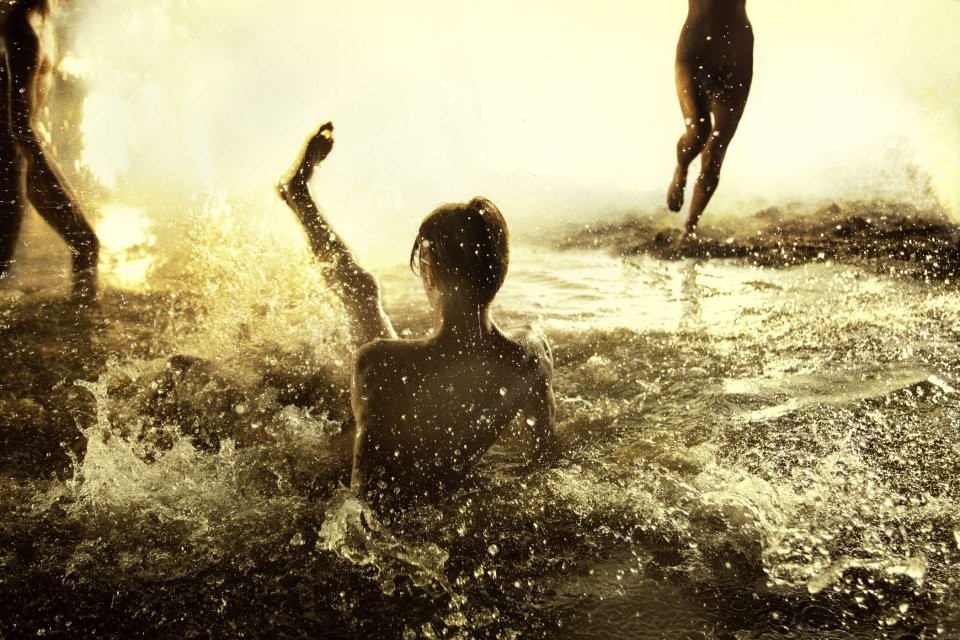 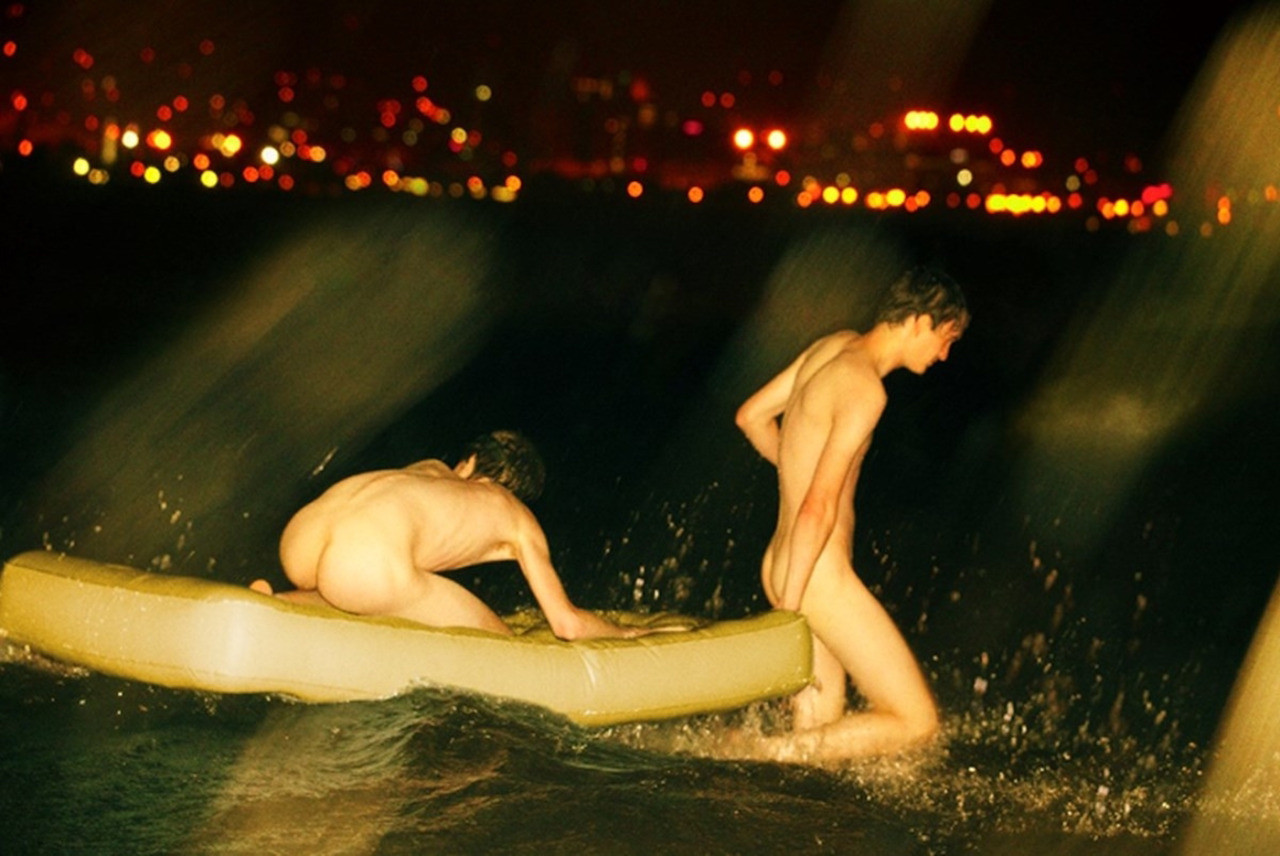 From 19 February to 15 May 2016 Galleria d’Arte Moderna e Contemporanea di Bergamo presents an extensive show of works by Ryan McGinley , the first solo exhibition by the American artist at an Italian institution and the first one that GAMeC has devoted to a young photographer on the international scene.

McGinley is considered one of the most important contemporary artists, so influential that the Whitney Museum and MoMA P.S.1 in New York devoted a solo exhibition to him in 2003 and 2004, respectively. In 2007 he received the Young Photographer Infinity Award from the prestigious International Center of Photography in New York. He grew up in New Jersey and then moved to New York’s East Village, becoming part of the irrepressible underground community of graffiti artists, skateboarders and artists. He captured this group of young people in their excesses and restless lifestyle, making them the main subject of his work, which culminated with his first publication, The Kids Are Alright (1999).

McGinley’s work witnesses and speaks for the subculture of the Nineties, which then burst onto the scene in the new millennium.His digital photographs revolve around youth, freedom, hedonism, excess, the vital spirit, and the relationship between humans and nature. These are very powerful, compelling and fascinating works with an energy that expands through the figures’ surroundings.

Trevor too fast & not enough.

Trevor waving his John Deere hat from the driveway as you ride by on your squeaky Schwinn.

Trevor who fingered a freshman girl then tossed her panties in the lake for fun.

For summer. For your hands

were wet & Trevor’s a name like a truck revving up in the night. Who snuck out to meet a boy like you. Yellow & nearly nothing. Trevor going 60 through his daddy’s wheat field. Who jams all his fries into whopper & chews with two feet on the gas. Your eyes closed in the passenger, the wheat a yellow confetti.

Three freckles on his nose.

Three periods to a boy-sentence.

Trevor Burger King over McDonald’s cause the smell of smoke on the beef makes it real.

Trevor I Like sunflowers best. They go so high.

and still opening that big.

Trevor loading the shotgun two red shells at a time.

It’s kind of like being brave, I think. Like you got this big ol’e head full of seeds & no arms to defend yourself.

His hard lean arms aimed in the rain. When he touches the trigger’s black tongue, you swear you can taste his finger in your mouth.

Trevor pointing at the one-winged starling spinning in dirt & takes it for something new. Something smoldering like a word. Like a Trevor

who knocked on your window at three in the morning, who you thought was smiling until you saw the blade held over his mouth. I made this, I made this for you, he said, the knife suddenly in your hand. Trevor later

Are you Trevor’s eyes: the blue shafts in a gutted mine?

Trevor the hunter. Trevor the carnivore, the redneck, not

a pansy, shotgunner, sharpshooter, not fruit or fairy. Trevor the meateater but not

veal. Never veal. Fuck that, never again after his daddy told him the story when he was seven, at the table, veal roasted with rosemary. How they were made. How the difference between veal & beef is the children. The veal are the children

of cows, are calves. They are locked in boxes the size of themselves. A body-box, like a coffin, but alive, like a home. The children, the veal, they stand very still because tenderness depends on how little the world touches you. To stay tender, the weight of your life cannot lean on your bones.

into Trevor’s eyes. Trevor who would never eat a child. Trevor the child with the scar on his neck like a comma. A comma you now

put your mouth to. That violet hook holding two complete thoughts, two complete bodies without subjects. Only verbs. When you say Trevor you mean the action, the pine-stuck thumb on the lighter, the sound of his boots

on the Chevy’s red hood. The wet live thing dragged into the truckbed behind him.

Your Trevor. Your brunette but blond-dusted-arms man pulling you into the truck. When you say Trevor you mean you are the hunted, a hurt he can’t refuse because that’s

& you wanted to be real, to be swallowed by what drowns you only to surface, brimming

at the mouth. Which is kissing.

Trevor lying shirtless on the barn rafters. Trevor wearing the WWII Army helmet he bought for $7 in Wethersfield.

Trevor on his back with his dead mother’s radio to his ear, listening, listening.

The field empty of an orchard. The night empty of fathers.

Trevor so still you had to run a finger across his cheek, to make sure.

& he twitches. & it’s fourth down for the Patriots, says the radio. With 27 seconds to go. & Trevor’s fists are tight as white rosebuds on the first day of June.

All or nothing says the radio.

His ear, every petal, pressed to the black world. We got this, he says.

We got this. & he’s looking up at the ceiling, then through it, to the starless sky & you never knew his voice could be this soft, as if he was whispering a secret to a seed still green in the loam.

We got this, he says as dust coats your lungs, sweat in your eyes, Trevor’s gaze fixed on a star neither of you sees.

We got this. & you believe him.

His tongue in your throat, Trevor speaks for you. He speaks & you flicker, a flashlight going out in his hands so he knocks you in the head to keep the bright on. He turns you this way & that to find his path through the dark woods.

waiting in his coffin-house. No window—just a slot for oxygen. Pink nose pressed to the autumn night, inhaling. The bleached stench of cut grass, the tarred gravel road, coarse sweetness of leaves in a bonfire, the minutes, the distance, the earthly manure of his mother a field away.

The boy. The motor oil. The body, it fills as it fills up. But your thirst overflows what holds it. But your ruin, you thought it would nourish him. That he would feast on it & grow into a beast you could hide in.

But every box will be opened in time, in language. The comma

on his neck a border, a break. The line broken, a queering of syntax, of Trevor, who stared too long into your face, saying Where am I? Where am I?

Because by then there was blood on your lips.

By then the truck was totaled into a dusked oak, smoke in the wrinkled hood. Trevor, vodka-breathed & skull-thin, said Stay. Said Just stay

some more as the sun slid deeper into the trees, as the windows reddened in the weak light, You should stay here, they reddened like someone trying to see

Trevor who texted you after two months of silence—

writing please instead of plz.

Trevor who was running from home. Who was getting the fuck out. Soaked Levi’s. Eye a burst plum from his daddy’s one-arm-lost-in-the-war haymaker. Who ran away to the park because where else when you’re 15.

Who you found in the rain, under the metal slide shaped like a hippopotamus. Whose icy boots you took off & covered, one-by-one, each dirt-cold toe, with your mouth. The way your mother used to do when you were small & shivering.

Because he was shivering. Your Trevor. Your all-American beef but no veal. Your John Deere. Green vein in his jaw: stilled lightning you trace with your tongue.

Because he tasted like the river & maybe you were one wing away from sinking.

Because the calf waits in his cage so calmly

& memory is a second chance.

Trevor’s head tilted back, dipping into the dream again. Trevor with one good eye searching, searching. Ink-throat opened behind his incisors.

Both of you lying beneath the slide: two commas with no words, at last, to keep you apart. You

who crawled from the wreckage summer like sons leaving their mothers’ bodies.

A calf in a box, waiting. A box tighter than a womb. The rain coming down, its hammers on the metal like an engine revving up. The night standing in violet air, a calf

shuffling inside, hoofs soft as erasers, the bell on his neck ringing

& ringing. The shadow of a man growing up to it. The man with his keys, the commas of doors. Your head on Trevor’s chest. The calf being lead by a string, how it stops

beside you. Steady breaths. Rain. Warmth welling through his plaid shirt like steam issuing from the calf’s flanks as you listen to the bell

across the star-flooded field, the sound shining

like a knife. The sound buried deep in Trevor’s chest

& you listen. That ringing. You listen like an animal

learning how to speak.