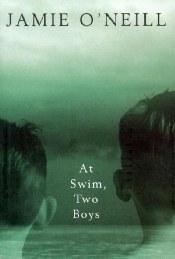 Jim joined the queue of penitents. It was impossible he should say these things to Father Taylor. He had no words for these things. His mind would not consider them, but physically, in a twinge of his head, jarred their notion away. Would Father Taylor know him? The lamp that lit the priest's profile would show his face if the priest turned. If the priest should turn and hunt him out of the confessional? There was a sin against the Holy Ghost that only a priest knew what it was. That sin could not be forgiven. If this were that sin? Was there truly such a sin?

The queue shuffled its few feet closer to grace. And he with it.

And now he was inside. The confessional evening closed round him, the crucifix glimmered in front. A woman's mutters sounded through the space – forgiven, Latin, click. A moment when all awaits. With louder click his own slide opens. Through the cruciform gauze in the grating the bristling ear of the priest.

Jim told his sins that were commonplace and venial, hearing them for a national schoolboy's at his first confession. When he finished the priest said, 'Anything else, my son?' On Jim's hesitating, he prompted, as Jim had known he must, 'Sins of impurity?'

Jim took a breath, and, in its exhalation, outspilled the story, all the horrid notes, in quavers and breves as he stuttered and paused, how the black bushes he had threaded between, and the waves had splattered the pathway, down the pier till he came to the shelter, and there he had waited while the sea in restless motion moved ... on and on, unmanning himself with the awful truths, and in his nervousness and dread perhaps not entirely coherently, for the priest interrupted and asked, Was she a married woman?

Jim was startled for a moment, so that he answered, No. Was she a fallen woman? It wasn't a woman at all, Jim said. The priest paused. It was a girl, so. Jim began, but again the priest interrupted. Had he touched her? No, Father. He was certain he had not touched her? Father, it wasn't a girl at all.

Was she a Protestant woman and she did lure him on? Jim had thought this worst was over, but no, he must suffer the scandal of speaking it again. Father, he was truly ashamed to tell it, but it was a soldier, Father. An English soldier? Jim didn't know. Was it the English soldier who lured him to the girl? It wasn't a girl, Father. With a testy shake of his head that had Jim cowering lest he should turn, Father Taylor gave him to know it didn't matter her age but it was the sin he should mind. He should thank God and his Holy Mother that she had looked down on him then and prevented his touching the fallen Eve. Where did this take place? Jim answered the pier. The pier, the priest told him, was a perilous place. The pier was an occasion only begging for sin. The pier in fact was a Protestant intrigue where they paid fallen women to parade in their finery and lure Catholic boys to their peril. Was he sorry for his sin? He was, but there really was no girl involved. It didn't matter was she a girl or a woman, his guilt was the same, but if she was a married woman then the sin was more grievous yet. Was he sure she was not married? Father, please, it was a soldier. The soldier must look to his own salvation. Father Taylor did not doubt he was a Saxon and a heretic and was most like lost to God. Either that or an Ulsterman. However, that he led Jim to the girl did not lighten one jot the blame attached to Jim. Did Jim promise never again to sin that way? It was a heinous sin even to speak to such a girl. Had he spoken? No, Father. Did he promise? He did. Would he promise never again to stray to the pier? He would promise that.

Father Taylor then, continuing his forcefully whispered mode, discoursed upon chastity and marriage and think what his mother would say and letting down the good name of all Irish boys. With bleak dispassion Jim listened. The priest spoke of Our Lady and told how every impure thought, how every glance, was a thorn in her sacred heart. Jim had had a narrow escape. He might have sinned deplorably had she not been watching over him. Accordingly, he gave penance of Rosaries and had already launched into his Latin, when Jim touched the grill and he said, 'Father?'

'Am I truly absolved?'

'Have you told all your sins?'

'Will you forget about the soldier. Forget about the girl. Pray for them in all charity by all means. But most important pray for your own soul that is in peril. And keep clear of the pier. Even for fishing.'