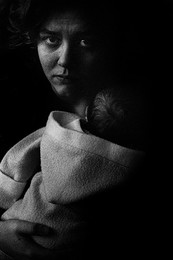 "I first met Julie on February 28, 1993. Julie, 18, stood in the lobby of the Ambassador Hotel, barefoot, pants unzipped, and an 8 day-old infant in her arms. She lived in San Francisco's SRO district, a neighborhood of soup kitchens and cheap rooms. Her room was piled with clothes, overfull ashtrays and trash. She lived with Jack, father of her first baby Rachael, and who had given her AIDS. She left him months later to stop using drugs.

Her first memory of her mother is getting drunk with her at 6 and then being sexually abused by her stepfather. She ran away at 14 and became drug addict at 15. Living in alleys, crack dens, and bunked with more dirty old men than she cared to count.

For the last 18 years I have photographed Julie Baird's complex story of multiple homes, AIDS, drug abuse, abusive relationships, poverty, births, deaths, loss and reunion. Following Julie from the backstreets of San Francisco to the backwoods of Alaska."