Location filming for North by Northwest took place between late August and mid-September 1958. With the exception of the crop duster sequence, location filming was shot chronologically: New York City, then Chicago and finally Rapid City, South Dakota where some of the Mount Rushmore daytime scenes were filmed.

I never discuss love on an empty stomach.

Roger: Well… here we are again.

Roger: You recommend anything?

Eve: The brook trout. A little "trouty" but quite good.

Roger: You feel you've seen me somewhere before.

Roger: I have that effect on people. It's something about my face.

Roger: You think so?

Roger: Oh, you're that type.

Roger: I don’t know. Somehow they seem to put me at a disadvantage.

Eve: Because you're not honest with them?

Eve: Like that business about the seven parking tickets?

Roger: What I mean is, the moment I meet an attractive woman, I... have to start pretending I've no desire to make love to her.

Eve: What makes you think you have to conceal it?

Roger: Think how lucky I am to have been seated here.

Eve: Luck had nothing to do with it.

Eve: I tipped the steward $5 to seat you here if you should come in.

Roger: Is that a proposition?

Eve: I never discuss love on an empty stomach.

Eve: But you haven't.

Roger: Don't you think it's time we were introduced?

Roger: Tell me, what do you do besides lure men to their doom on the 20th Century Limited?

Eve: No, you're not. You're Roger Thornhill of Madison Avenue and you're wanted for murder on every front page in America. Don't be so modest.

Roger: Is that the only reason?

Eve: It's going to be a long night.

Eve: I don't particularly like the book I've started.

Eve: You know what I mean?

Roger: Let me think. (pauses) Yes, I know exactly what you mean.

Eve pulls out a cigarette. Roger takes out matches to light it.

Eve: Roger O. Thornhill. What does the "O" stand for?

Roger: Nothing. (lights her cigarette) I'd invite you to my bedroom if I had a bedroom.

Roger: Nothing, not even a ticket. I've been playing hide-and-seek with the Pullman conductor ever since the train left New York.

Eve: How awkward for you.

Roger: Yes, isn't it? No place to sleep.

Eve: I have a large drawing room all to myself.

Roger: That doesn't seem quite fair, does it?

Roger: Such a nice number.

Eve: It's easy to remember.

Roger: You wouldn't happen to have an extra pair of pajamas, would you?

Eve: Wouldn't I? Incidentally, I wouldn't order any dessert if I were you.

Roger: I get the message.

Eve: That isn't exactly what I meant. This train seems to be making an unscheduled stop and I just saw two men get out of a police car as we pulled into the station. They weren't smiling. 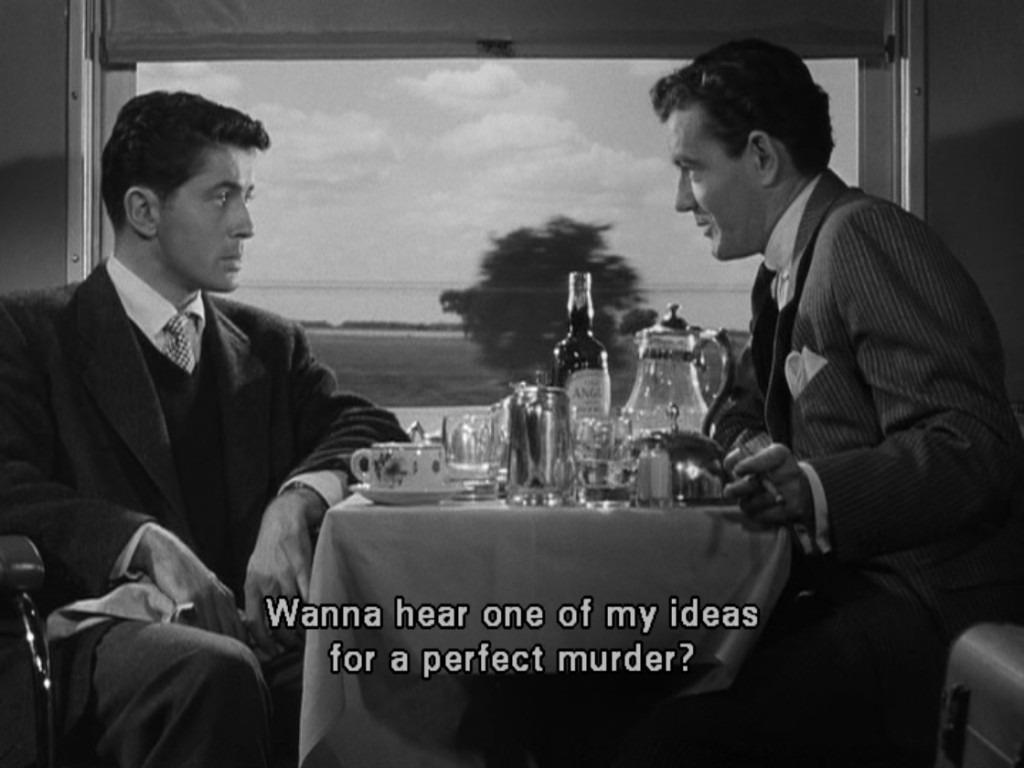 Every Hitchcock Cameo Ever

After much hunting and diligent editing, here is every Hitchcock cameo ever spotted from his beginning in silent cinema to his graphic horror in the 70s

The Birds: An Original Score

Commissioned by the Northwest Film Forum in Seattle as part of their Puget Soundtrack series, Madeleine Cocolas composed and performed a soundtrack to Hitchcock's classic film, The Birds.

Close encounters of the third kind for Cary Grant!
"Darth by Darthwest": when Hitchcock meets Lucas...

If you want to see two other Mashups Noir with Alfred Hitchcock, and the most beautiful shadows of the cinema, in two original stories, please follow the links:

-"Master of Suspense":
Now, the Star of the film, it’s him ! Alfred Hitchcock comes back to the Bates Motel, but for what?
To shoot a new movie ? Not really…
Made with the cameo appearances of the Master!
https://vimeo.com/145005566

The Red Drum Getaway from Gump on Vimeo.

A Hitchcock mashup where Kubrick is the villain.
"Jimmy was having a rather beautiful day until he bumped into Jack and things got weird."
Directed by: Adrien Dezalay, Emmanuel Delabaere, Simon Philippe.

Eyes of Hitchcock from Criterion Collection on Vimeo.

Music: "Anything can happen, and usually does... On the Orient Express" by Rob Cawley
License: http://creativecommons.org/licenses/by/3.0/

The Cabinet of Curiosities.