After "Invisible Man" by Ralph Ellison, the Prologue Jeff Wall based this elaborately staged photograph on the prologue of Ralph Ellison’s celebrated 1952 novel, Invisible Man. The novel’s protagonist, an unnamed African American man, relates that he lives secretly “in my hole in the basement,” where he has “wired the entire ceiling, every inch of it” with 1,369 lights powered by illegally siphoned off electricity. In addition to the prologue, Wall drew from other parts of Invisible Man and his own imagination to create this scene. His intention was not to make a literal illustration of the text, but to give form to the picture it inspired in his mind, which he calls “accidents of reading.” As he has explained, many of his images begin “from accidents in the street—events I witnessed by chance. These pictures are like that, except that the accident occurred when I happened to be reading a book. I had the same feeling reading […] that I have had many times when seeing something occur on the street or in some other place, a feeling that an opportunity for a picture was presented to me."

Wall refers to his method of photography as “cinematography.” Similar to the process of making a movie, his work is dependent on collaboration with a cast and assistants who help him to develop his painstakingly constructed sets. He uses a large-format camera with a telephoto lens to achieve the high resolution and fine details that characterize his prints. This photograph, like most of the artist’s work, has been printed on a transparency and mounted in a steel-framed light box. The large-scale image is illuminated from behind by fluorescent lights, which Wall began utilizing after seeing light-box advertisements in the late 1970s. Influential photographer Jeff Wall makes large-scale color images that seem to capture people engaged in everyday life, but are in fact largely staged. Interested in the filmmaking of the postwar era, particularly the unconventional narrative structures of Neo-Realism, his best known work involves constructing elaborate mis-en-scènes, which he photographs and then displays in wall-mounted lightboxes. “I wanted to exaggerate the artificial aspect of my work as a way to create a distance from the dominant context of reportage, the legacy of Robert Frank and the others,” Wall explains. “I saw something else in photography, something to do with scale, with color and with construction, which might be valid along with the more established values that had come down from the 19th century and had been extended by the great photographers of the 20th century.” Wall’s practice is varied, and for many years has also incorporated smaller, documentary photographs and, since 1997, black-and-white pictures.

A Sudden Gust of Wind (after Hokusai) is a large colour photograph displayed in a light box. It depicts a flat, open landscape in which four foreground figures are frozen as they respond to a sudden gust of wind. It is based on a woodcut, Travellers Caught in a Sudden breeze at Ejiri(c.1832) from a famous portfolio, The Thirty-six Views of Fuji, by the Japanese painter and printmaker Katsushika Hokusai (1760-1849).

Wall photographed actors in a landscape located outside his home town, Vancouver, at times when similar weather conditions prevailed over a period of five months. He then collaged elements of the photograph digitally in order to achieve the desired composition. The result is a tableau which appears staged in the manner of a classical painting.

As in Hokusai’s original, two men clutch their hats to their heads while a third stares up into the sky, where his trilby is being carried away by the wind. On the left, a woman’s body is halted in a state of shock, her head concealed by her scarf which has been blown around her face. A sheaf of papers in her hand has been dispersed by the gust and their trajectory, over the centre of the image, creates a sense of dynamic movement. Two narrow trees, also in the foreground, bend in the force of the wind, releasing dead leaves which mingle with the floating papers.

In Hokusai’s image the landscape is a curving path through a reed-filled area next to a lake, leading towards Mount Fuji in the far distance. In Wall’s version, flat brown fields abut onto a canal. Small shacks, a row of telegraph poles and concrete pillars and piping evoke industrial farming. The unromantic nature of the landscape is reinforced by a small structure made of corrugated iron in the foreground. The pathway on which the figures stand is a dirt track extending along the front of the photograph from one side to the other. There is no sense of connection between the characters, whose position in the landscape appears incongruous. Two wear smart city clothes, adding to the sense of displacement. 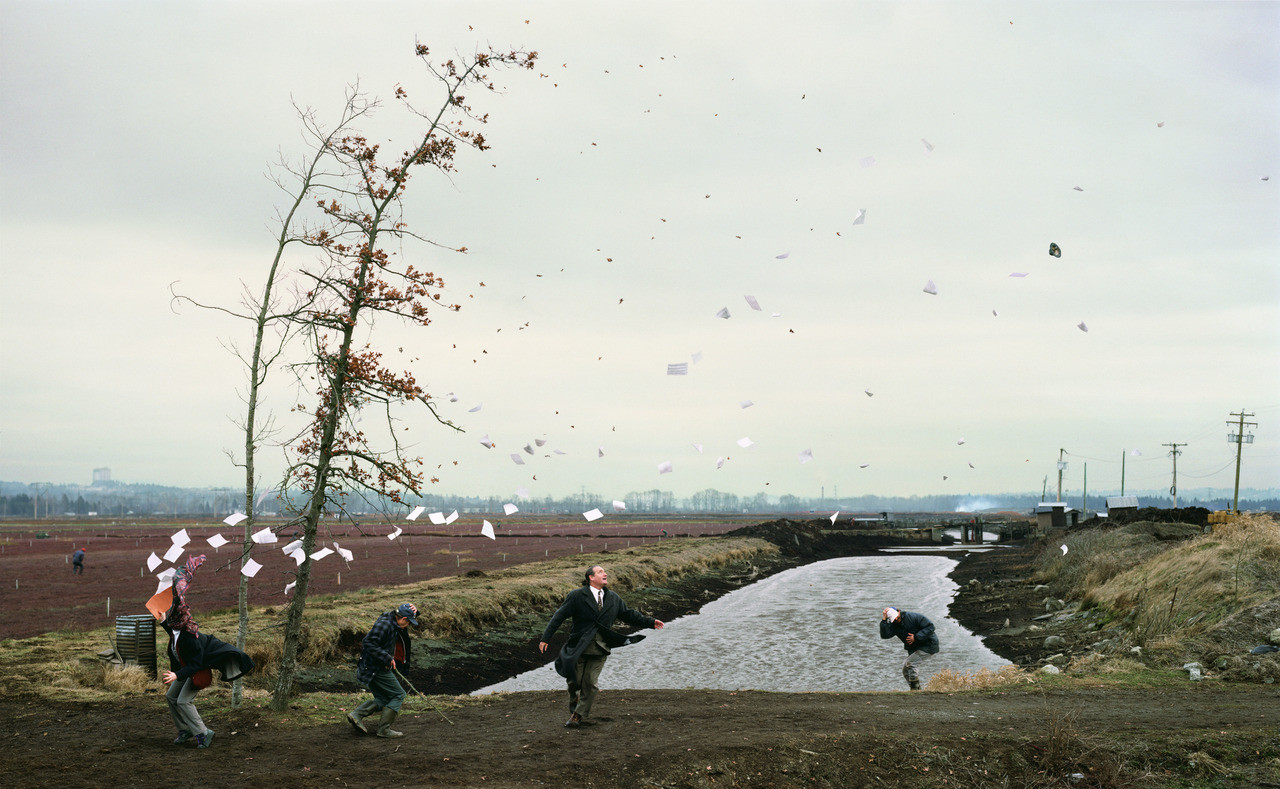 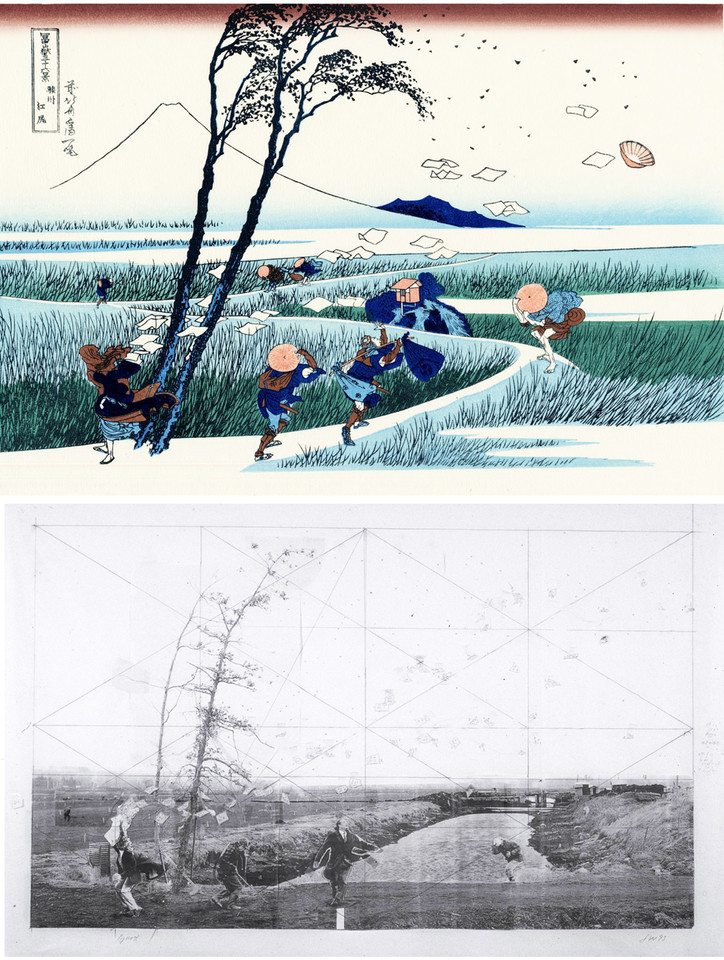