Dean Martin and John Wayne sing "Don't Fence Me in"

On the Dean Martin Show - Dean tries to get John Wayne to sing "Don't Fence Me In" with him.

IN THE summer of 1943 I was eight, and my father and mother and small brother and I were at Peterson Field in Colorado Springs. A hot wind blew through that summer, blew until it seemed that before August broke, all the dust in Kansas would be in Colorado, would have drifted over the tar-paper barracks and the temporary strip and stopped only when it hit Pikes Peak. There was not much to do, a summer like that: there was the day they brought in the first B-29, an event to remember but scarcely a vacation programme. There was an officers' club, but no swimming pool; all the officers' club had of interest was artificial blue rain behind the bar. The rain interested me a good deal, but I could not spend the summer watching it, and so we went, my brother and I, to the movies.

We went three and four afternoons a week, sat on folding chairs in the darkened hut which served as a theatre, and it was there, that summer of 1943 while the hot wind blew outside, that I first saw John Wayne. Saw the walk, heard the voice. Heard him tell the girl in a picture called War of the Wildcats that he would build her a house, 'at the bend in the river where the cottonwoods grow'.

As it happened I did not grow up to be the kind of woman who is the heroine in a Western, and although the men I have known have had many virtues and have taken me to live in many places I have come to love, they have never been John Wayne, and they have never taken me to that bend in the river where the cottonwoods grow. Deep in that part of my heart where the artificial rain forever falls, that is still the line I wait to hear.

From 'John Wayne: A Love Song' in Slouching Towards Bethlehem: Essays By Joan Didion (1968)

John Wayne in a (kind of) pink rabbit suit. 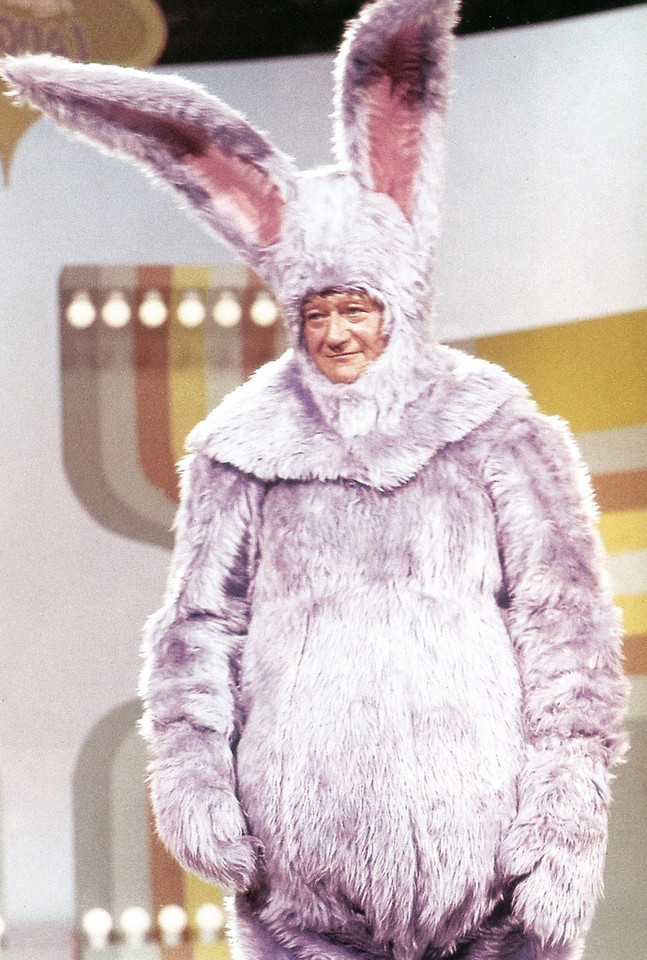