Sylvia Plath - For a Fatherless Son

You will be aware of an absence, presently,
Growing beside you, like a tree,
A death tree, color gone, an Australian gum tree ---
Balding, gelded by lightning--an illusion,
And a sky like a pig's backside, an utter lack of attention.
But right now you are dumb.
And I love your stupidity,
The blind mirror of it. I look in
And find no face but my own, and you think that's funny.
It is good for me
To have you grab my nose, a ladder rung.
One day you may touch what's wrong ---
The small skulls, the smashed blue hills, the godawful hush.
Till then your smiles are found money.

Pure? What does it mean?
The tongues of hell
Are dull, dull as the triple

Tongues of dull, fat Cerberus
Who wheezes at the gate. Incapable
Of licking clean

The aguey tendon, the sin, the sin.
The tinder cries.
The indelible smell

Of a snuffed candle!
Love, love, the low smokes roll
From me like Isadora’s scarves, I’m in a fright

One scarf will catch and anchor in the wheel,
Such yellow sullen smokes
Make their own element. They will not rise,

But trundle round the globe
Choking the aged and the meek,
The weak

Hothouse baby in its crib,
The ghastly orchid
Hanging its hanging garden in the air,

Devilish leopard!
Radiation turned it white
And killed it in an hour.

Greasing the bodies of adulterers
Like Hiroshima ash and eating in.
The sin. The sin.

Darling, all night
I have been flickering, off, on, off, on.
The sheets grow heavy as a lecher’s kiss.

I am too pure for you or anyone.
Your body
Hurts me as the world hurts God. I am a lantern——

My head a moon
Of Japanese paper, my gold beaten skin
Infinitely delicate and infinitely expensive.

Does not my heat astound you! And my light!
All by myself I am a huge camellia
Glowing and coming and going, flush on flush.

I think I am going up,
I think I may rise——
The beads of hot metal fly, and I love, I

Am a pure acetylene
Virgin
Attended by roses,

By kisses, by cherubim,
By whatever these pink things mean!
Not you, nor him

Nor him, nor him
(My selves dissolving, old whore petticoats)——
To Paradise.

A smile fell in the grass.
Irretrievable!

And how will your night dances
Lose themselves. In mathematics?

Such pure leaps and spirals ----
Surely they travel

The world forever, I shall not entirely
Sit emptied of beauties, the gift

Of your small breath, the drenched grass
Smell of your sleeps, lilies, lilies.

Their flesh bears no relation.
Cold folds of ego, the calla,

And the tiger, embellishing itself ----
Spots, and a spread of hot petals.

The comets
Have such a space to cross,

Such coldness, forgetfulness.
So your gestures flake off ----

Warm and human, then their pink light
Bleeding and peeling

Through the black amnesias of heaven.
Why am I given

Six sided, white
On my eyes, my lips, my hair

I have done it again.
One year in every ten
I manage it——
A sort of walking miracle, my skin
Bright as a Nazi lampshade,
My right foot
A paperweight,
My face a featureless, fine
Jew linen.
Peel off the napkin
O my enemy.
Do I terrify?——
The nose, the eye pits, the full set of teeth?
The sour breath
Will vanish in a day.
Soon, soon the flesh
The grave cave ate will be
At home on me
And I a smiling woman.
I am only thirty.
And like the cat I have nine times to die.
This is Number Three.
What a trash
To annihilate each decade.
What a million filaments.
The peanut-crunching crowd
Shoves in to see
Them unwrap me hand and foot——
The big strip tease.
Gentlemen, ladies
These are my hands
My knees.
I may be skin and bone,
Nevertheless, I am the same, identical woman.
The first time it happened I was ten.
It was an accident.
The second time I meant
To last it out and not come back at all.
I rocked shut
As a seashell.
They had to call and call
And pick the worms off me like sticky pearls.
Dying
Is an art, like everything else.
I do it exceptionally well.
I do it so it feels like hell.
I do it so it feels real.
I guess you could say I’ve a call.
It’s easy enough to do it in a cell.
It’s easy enough to do it and stay put.
It’s the theatrical
Comeback in broad day
To the same place, the same face, the same brute
Amused shout:
‘A miracle!’
That knocks me out.
There is a charge
For the eyeing of my scars, there is a charge
For the hearing of my heart——
It really goes.
And there is a charge, a very large charge
For a word or a touch
Or a bit of blood
Or a piece of my hair or my clothes.
So, so, Herr Doktor.
So, Herr Enemy.
I am your opus,
I am your valuable,
The pure gold baby
That melts to a shriek.
I turn and burn.
Do not think I underestimate your great concern.
Ash, ash—
You poke and stir.
Flesh, bone, there is nothing there——
A cake of soap,
A wedding ring,
A gold filling.
Herr God, Herr Lucifer
Beware
Beware.
Out of the ash
I rise with my red hair
And I eat men like air.

I shut my eyes and all the world drops dead;
I lift my lids and all is born again.
(I think I made you up inside my head.)

The stars go waltzing out in blue and red,
And arbitrary blackness gallops in:
I shut my eyes and all the world drops dead.

I dreamed that you bewitched me into bed
And sung me moon-struck, kissed me quite insane.
(I think I made you up inside my head.)

God topples from the sky, hell's fires fade:
Exit seraphim and Satan's men:
I shut my eyes and all the world drops dead.

I fancied you'd return the way you said,
But I grow old and I forget your name.
(I think I made you up inside my head.)

I should have loved a thunderbird instead;
At least when spring comes they roar back again.
I shut my eyes and all the world drops dead.
(I think I made you up inside my head.)

The night is only a sort of carbon paper,
Blueblack, with the much-poked periods of stars
Letting in the light, peephole after peephole . . .
A bonewhite light, like death, behind all things.
Under the eyes of the stars and the moon's rictus
He suffers his desert pillow, sleeplessness
Stretching its fine, irritating sand in all directions.

Over and over the old, granular movie
Exposes embarrassments—the mizzling days
Of childhood and adolescence, sticky with dreams,
Parental faces on tall stalks, alternately stern and tearful,
A garden of buggy rose that made him cry.
His forehead is bumpy as a sack of rocks.
Memories jostle each other for face-room like obsolete film stars.

He is immune to pills: red, purple, blue . . .
How they lit the tedium of the protracted evening!
Those sugary planets whose influence won for him
A life baptized in no-life for a while,
And the sweet, drugged waking of a forgetful baby.
Now the pills are worn-out and silly, like classical gods.
Their poppy-sleepy colors do him no good.

His head is a little interior of grey mirrors.
Each gesture flees immediately down an alley
Of diminishing perspectives, and its significance
Drains like water out the hole at the far end.
He lives without privacy in a lidless room,
The bald slots of his eyes stiffened wide-open

On the incessant heat-lightning flicker of situations.

Nightlong, in the granite yard, invisible cats
Have been howling like women, or damaged instruments.
Already he can feel daylight, his white disease,
Creeping up with her hatful of trivial repetitions.
The city is a map of cheerful twitters now,
And everywhere people, eyes mica-silver and blank,

Are riding to work in rows, as if recently brainwashed. 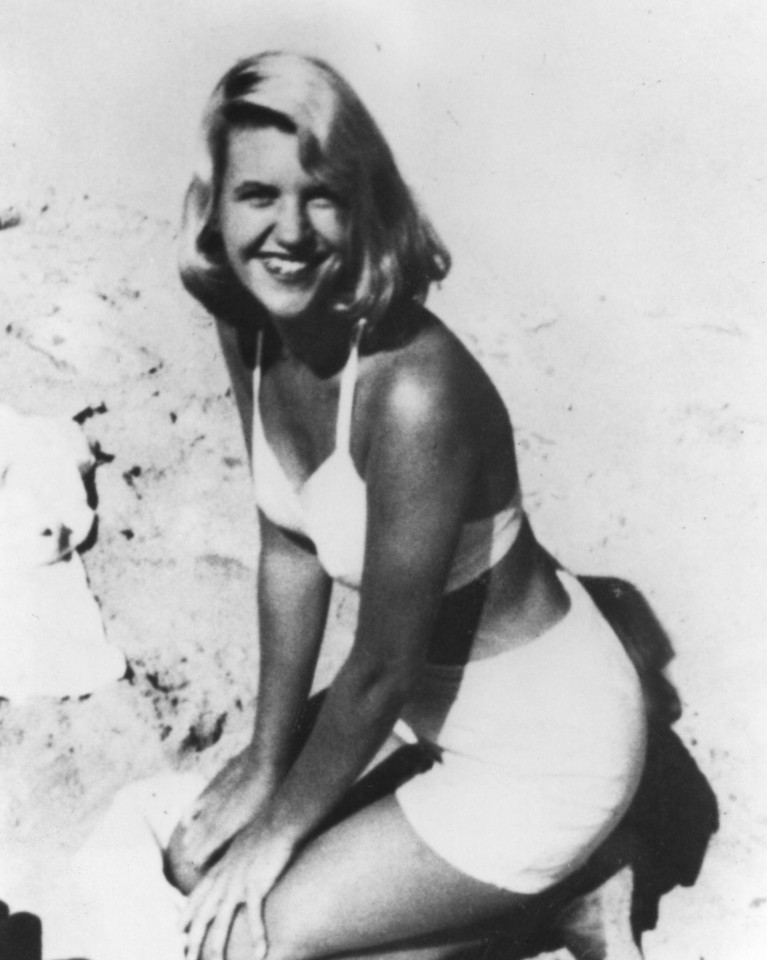 Sylvia Plath - A Voice Within Me