"Say Their Names" by Kadir Nelson for the New Yorker. Here you will find a closeup examination of the artist’s latest cover, in which the murder of George Floyd embodies the history of violence inflicted upon black people in America.

Now More Than Ever

Zadie Smith reads her short story from the July 23, 2018, issue of the magazine. Smith is the author of five novels, including “NW” and “Swing Time.” Her essay collection “Feel Free” was published in February. 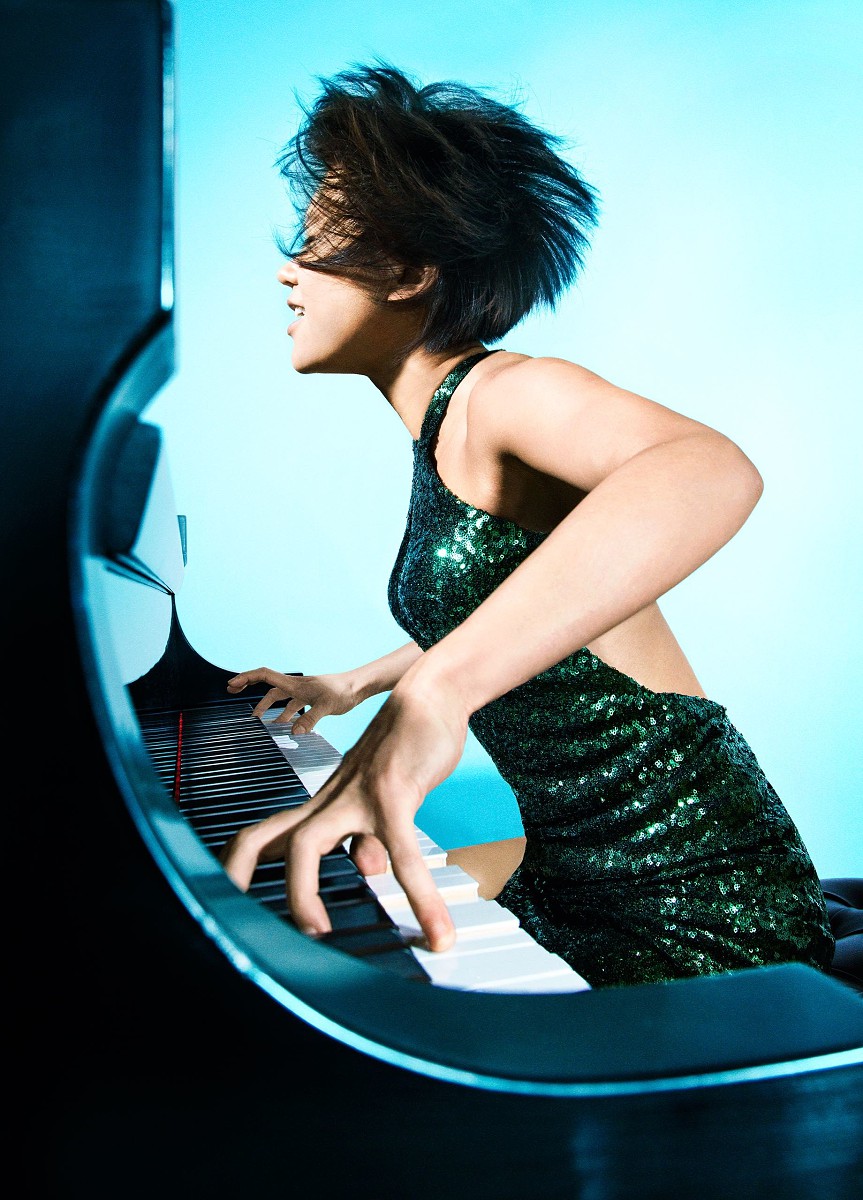 The arresting photograph that was chosen out of the hundreds, possibly thousands, of pictures Dukovic took of Yuja at the piano and, later, in the first-floor showroom, posed full figure in front of a piano with its lid up, represents her as no concertgoer has ever seen her. The wild disorder of the hair has never been seen in a concert hall. (Yuja’s hair tends to stay in place throughout the most rousing of her performances.) And the foreshortened, oversized hand is an obvious deviation from the consensus we call reality. Will Yuja cringe when she looks at the photograph? Or will she see it as expressive of her impudent, defiant nature and find in it, almost hear in it, an echo of her incomparable musicality? 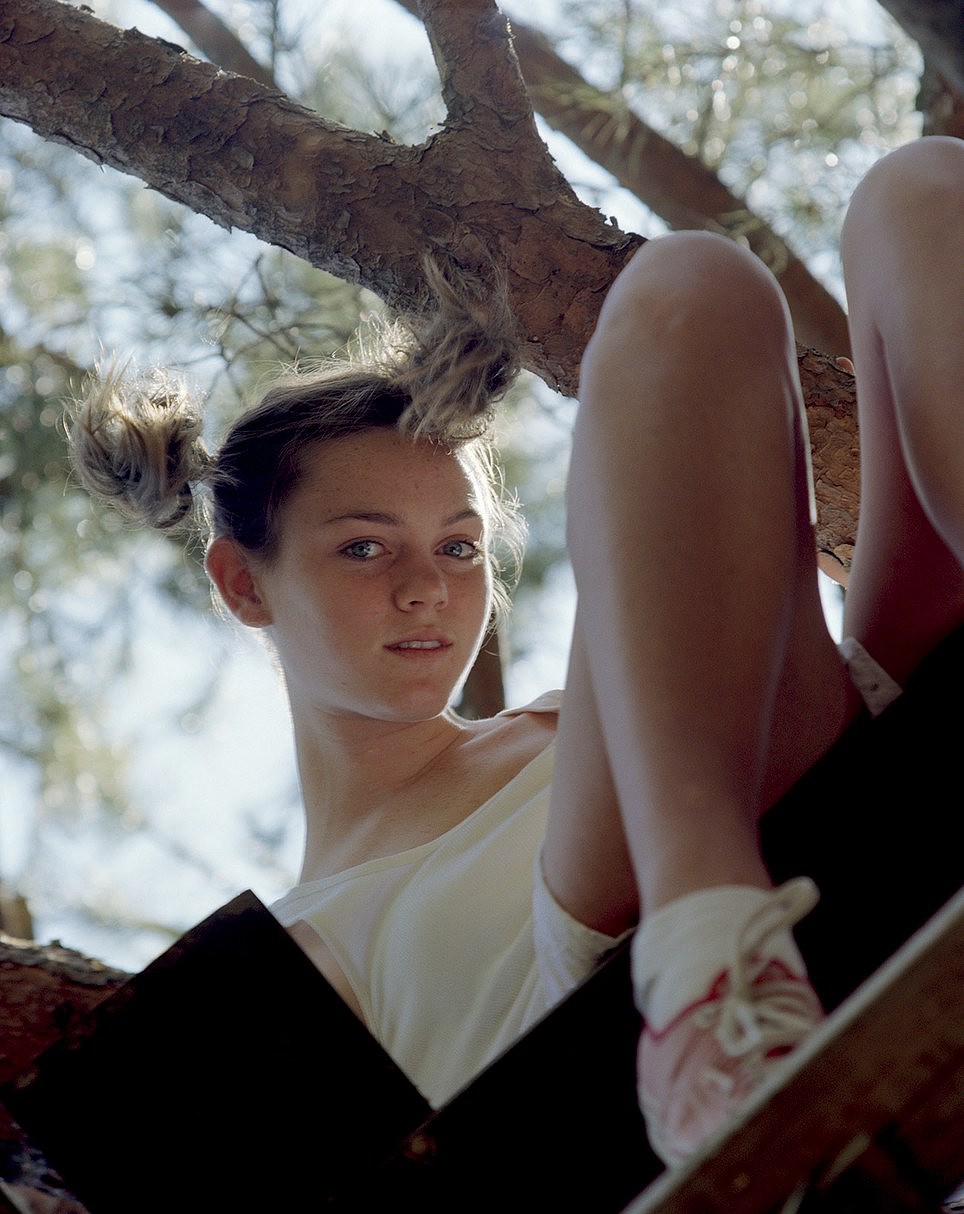 We can find signs of a narrative in the images collected in the new book “Confabulations,” by the Norwegian photographer Torbjørn Rødland. Symbols of childhood and adolescence, of marriage and death, and visual motifs—bent silverware, grasping hands, loose hair, wedding cake—seem to imply connections among the scenes. But trying to trace any clean story line through the photographs would result only in a messy sketch. Rødland told me that he allowed the title of the book, a psychiatric term for memories that are made up or distorted, to guide him in his editing. “There’s a pleasure in perforated narratives,” he said. It was toward the end of an eight-thousand-mile road trip across America, in 2015, that the Dutch photographer Robin de Puy, riding her Harley-Davidson through the dry expanses of Ely, Nevada, discovered the subject destined to define her adventure: a skinny youth of fifteen, who flashed by, in the night, on a child’s bicycle. De Puy managed to stop him. Later, with wonder, she recalled the encounter in her diary: “Fragile-looking boy, striking face, big ears—a puppy, a golden retriever waiting for the ball to be thrown, (too) naive. ‘Can I photograph you?’ ” He consented, and posed for a picture, though de Puy neglected to mention that he was allowed to blink. Her model stared straight into the lens, unflinching, until tears dripped toward his lips.

"I decided to look at the future so I could create a positive image,” Malika Favre says, about her cover for the Tech Issue. “When you read about women sharing their experiences in a field that is so dominated by males, it can get pretty depressing. For me, it’s obvious that the solution has to start from a young age, with education and the games kids play.” This cover, "The First," by Malika Favre, is what The New Yorker would have published had Hillary Clinton defeated Donald Trump to become the first female Commander-in-Chief.

Joost Swarte (born 24 December 1947 in Heemstede) is a Dutch cartoonist and graphic designer. He is best known for his ligne claire or clear line style of drawing, and in fact coined the term. 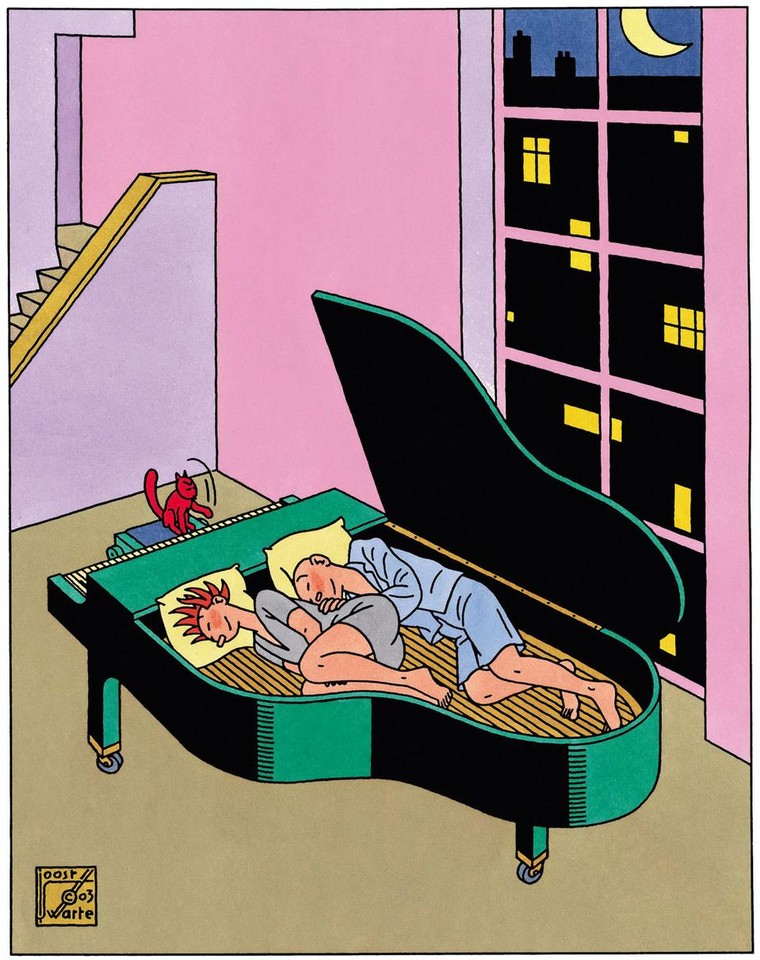 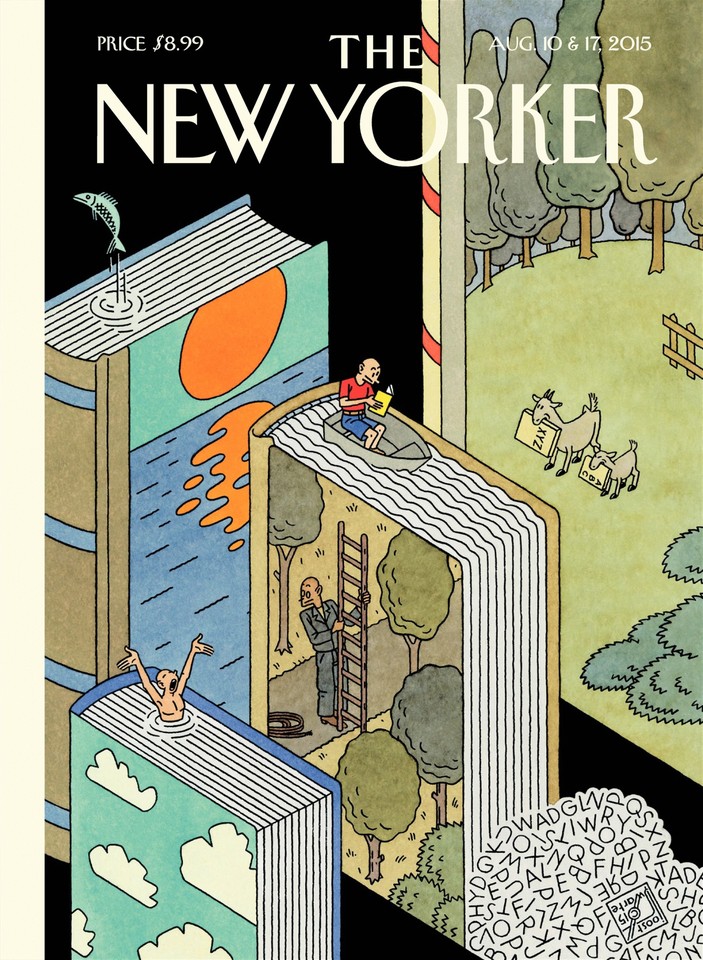 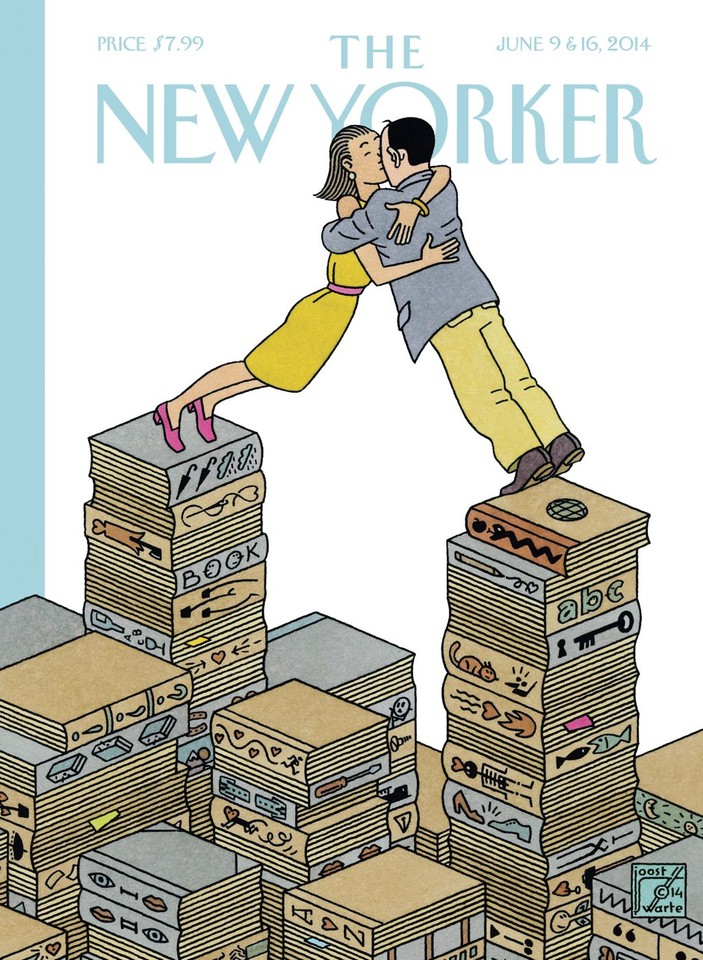 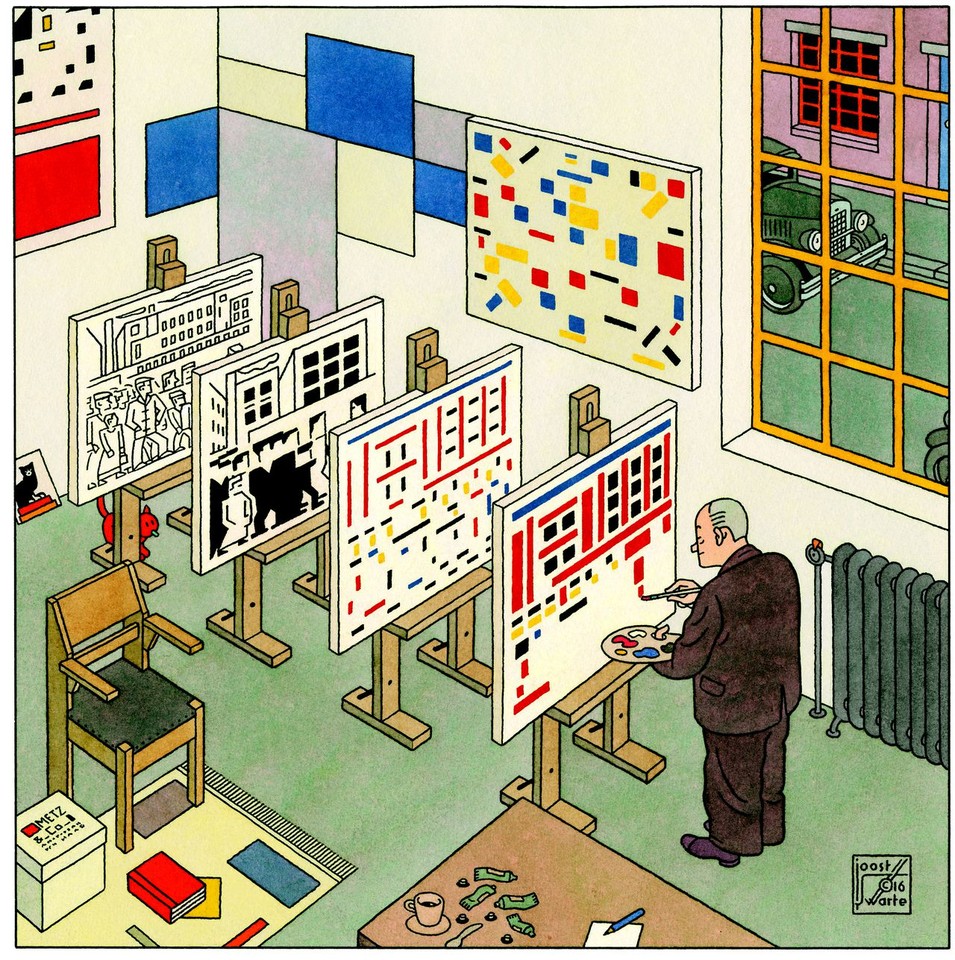 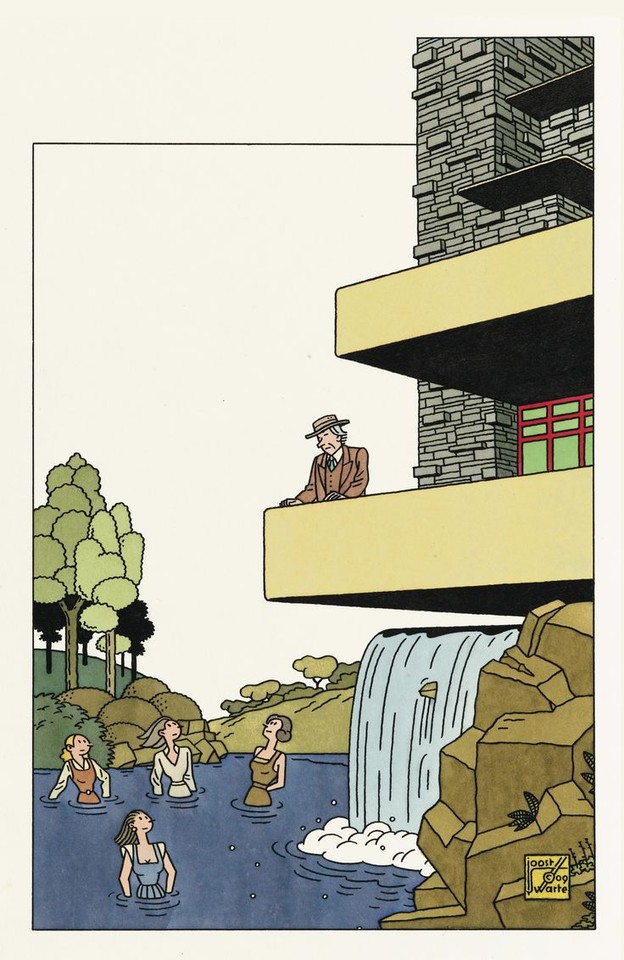 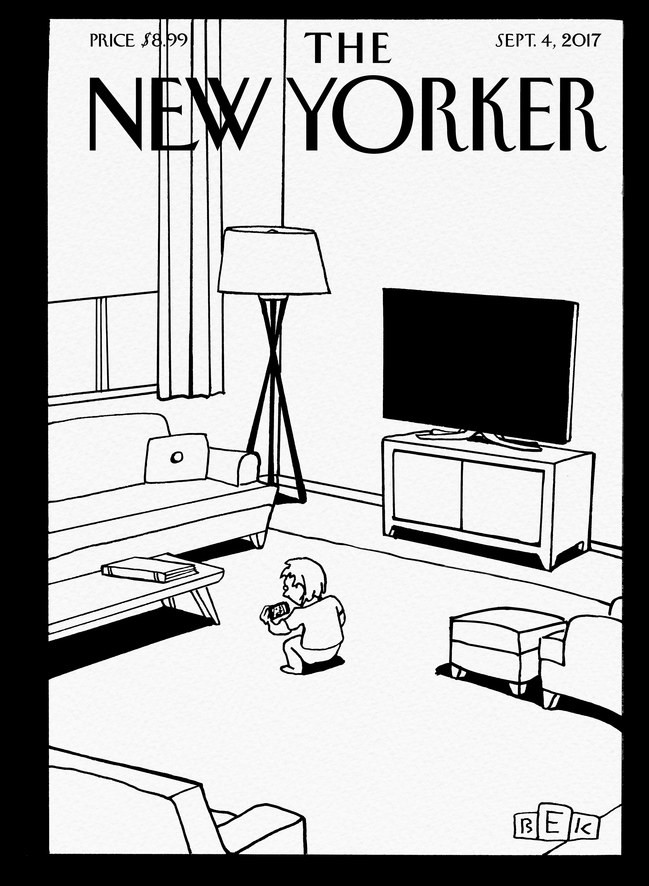 Television was my primary relationship when I was a child. It was my third parent, but it was the only parent that meant anything to me, or that had anything to teach me,” Bruce Eric Kaplan said, about his inspiration for this week’s cover. Kaplan, who is a prolific cartoonist and a writer for television shows such as “Girls,” “Six Feet Under,” and “Seinfeld,” was greatly influenced by what he described as the “huge, enormous box in the living room.” “I loved television so much that I wanted to crawl into the TV and live there, which I ended up doing by becoming a television writer,” he said. “I’d rather be in a fictional living room than in a real one. I still feel that way when I’m drawing a cartoon. I’d rather be inside my cartoon, in a world that I can control, that looks right to me, than out there in real life.” Of course, the experience of watching television as a child that Kaplan recalls is now largely a remnant of the past. “Television has now gone beyond television,” Kaplan said, meaning that the medium has expanded beyond the traditional family gathering in a living room now that we are able to stream shows on any device with a screen. “It’s a much different world,” he lamented. “Everyone’s watching their own thing, at their own time, on their own little thing.” 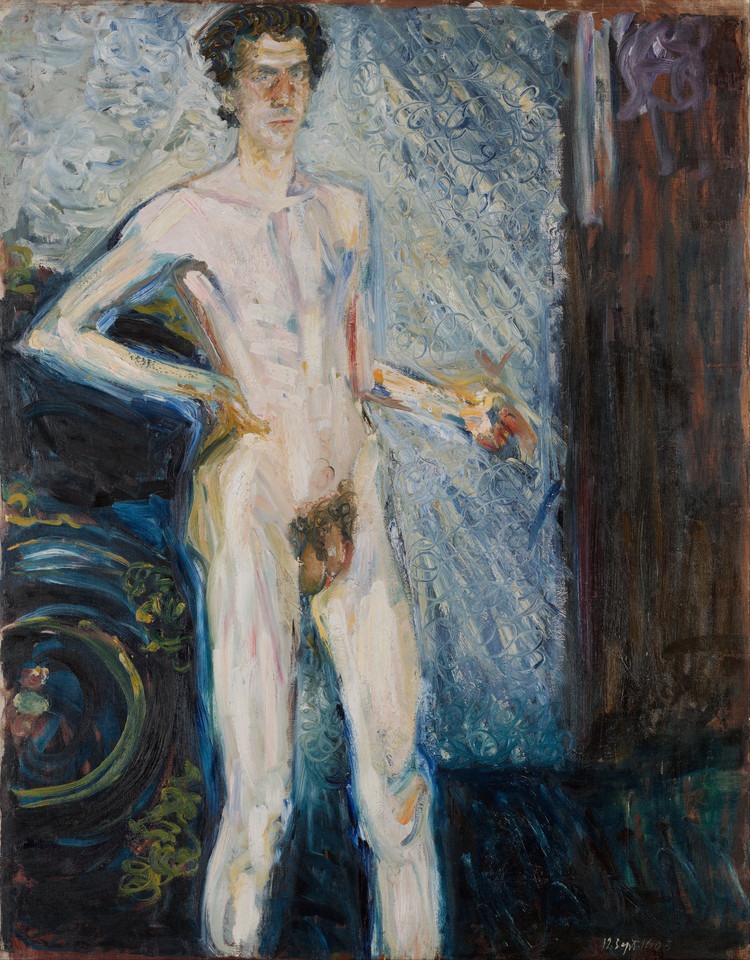 In a final, shocking self-portrait, he paints himself naked, his body streaked in clammy blue tones, his genitals colored strangely brown. Coffer describes the picture as one last gasp of self-assertion—“an artist who is crowing at his potency.” Others see it as a rehearsal for suicide—a portrait of the artist as a young corpse. Either way, the image has the feeling of a radical, irrevocable act. A veil has been torn; anything is possible.