This painting of the Crucifixion, Eakins's only religious work, demonstrates the artist's interest in rendering the human body realistically. Jesus's sagging torso, bent knees, stretched arms, and clenched hands all suggest an actual male body hanging from a cross in the agony of his last moments. To understand the human anatomy in this position, Eakins strapped a model, one of his students, to a cross.

Eakins spent most of his life in Philadelphia, but trained in a Paris studio where the study of the nude was considered an essential basis for painting.

The Swimming Hole (with Sketches and Studies) 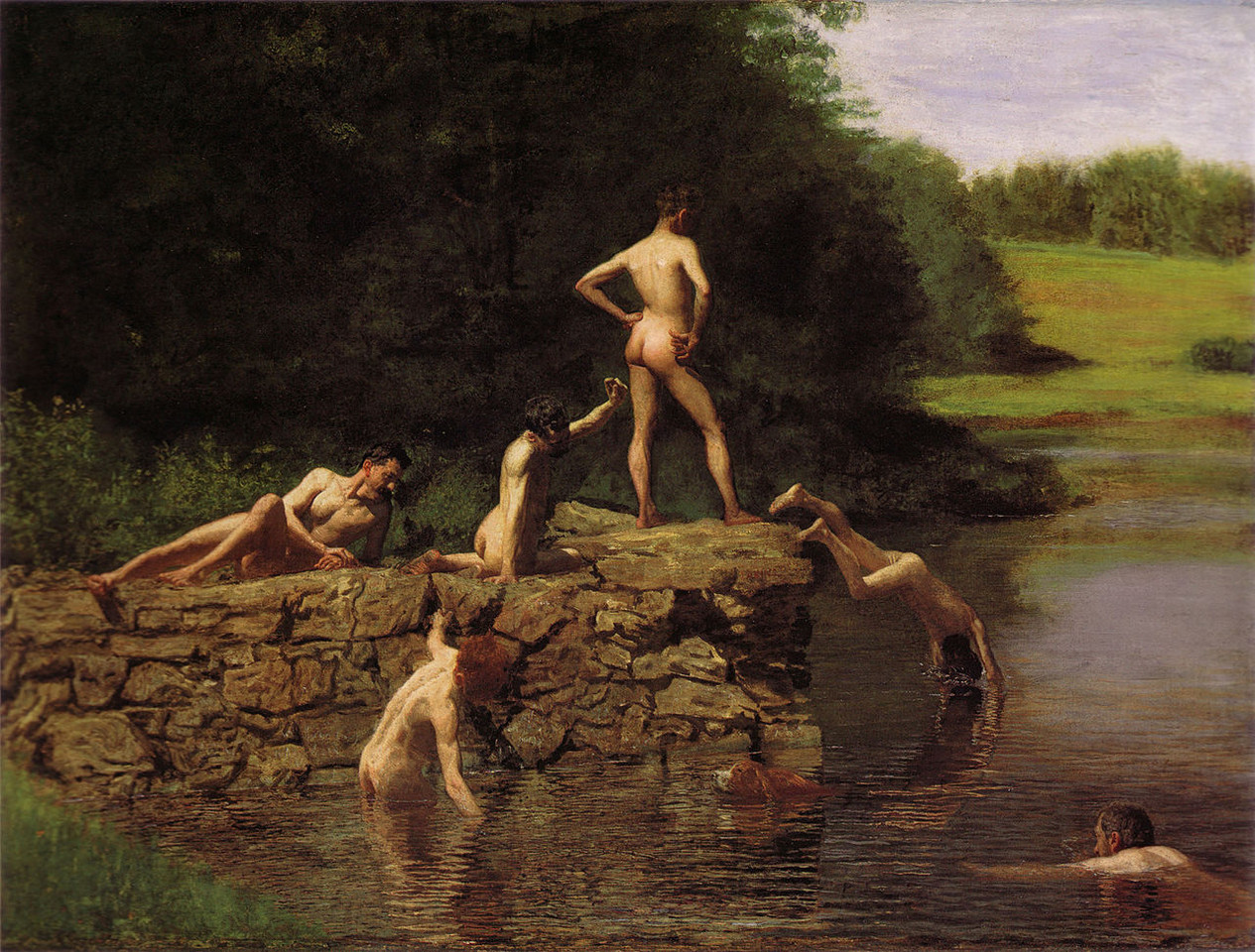 The Swimming Hole (also known as Swimming and The Old Swimming Hole) is an 1884–85 painting by the American artist Thomas Eakins (1844–1916), Goodrich catalog #190, in the collection of the Amon Carter Museum inFort Worth, Texas. Executed in oil on canvas, it depicts six men swimming naked in a lake, and is considered a masterpiece of American painting. According to art historian Doreen Bolger it is "perhaps Eakins' most accomplished rendition of the nude figure", and has been called "the most finely designed of all his outdoor pictures". Since theRenaissance, the human body has been considered both the basis of artists' training and the most challenging subject to depict in art, and the nude was the centerpiece of Eakins' teaching program at the Pennsylvania Academy of the Fine Arts. For Eakins, this picture was an opportunity to display his mastery of the human form. 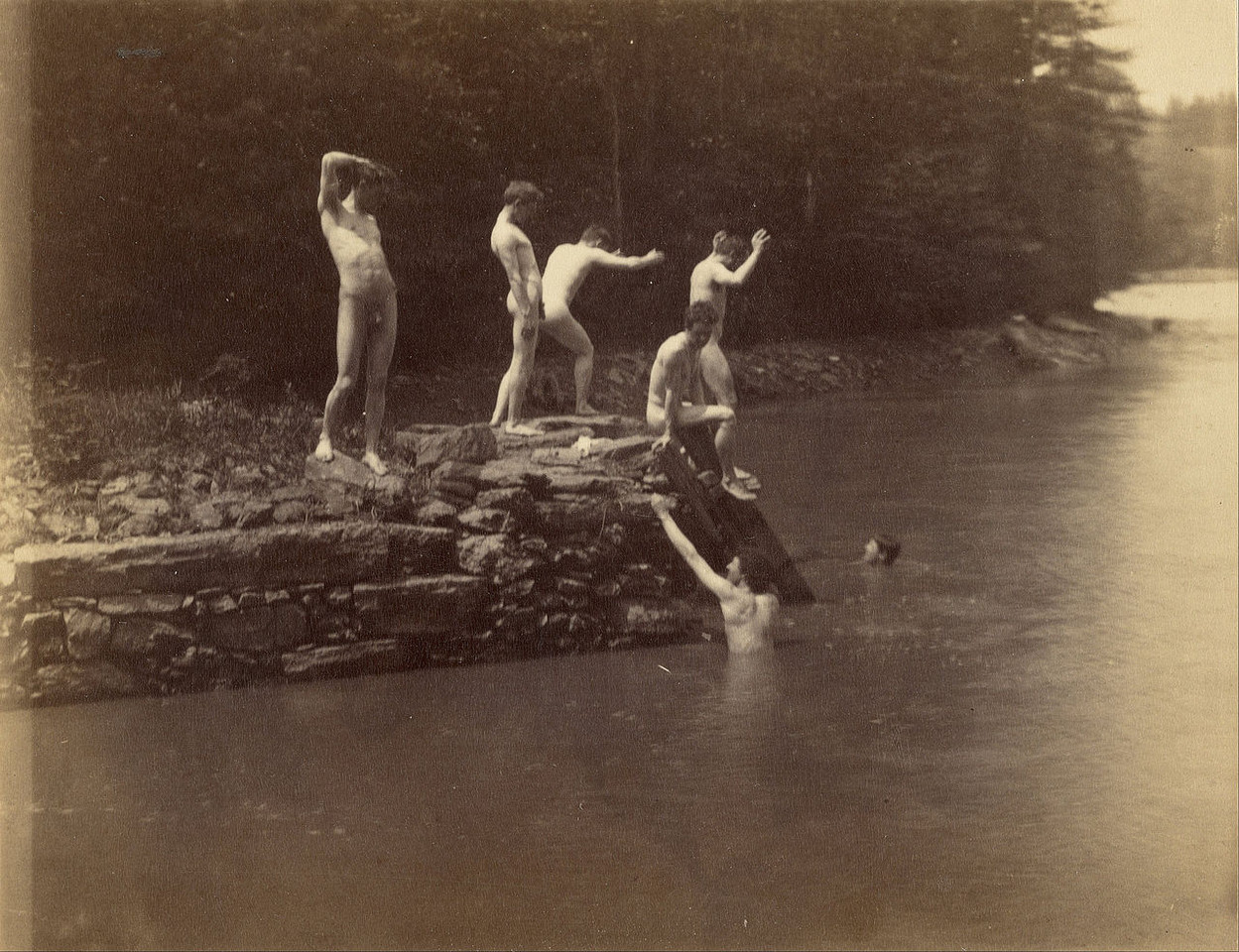 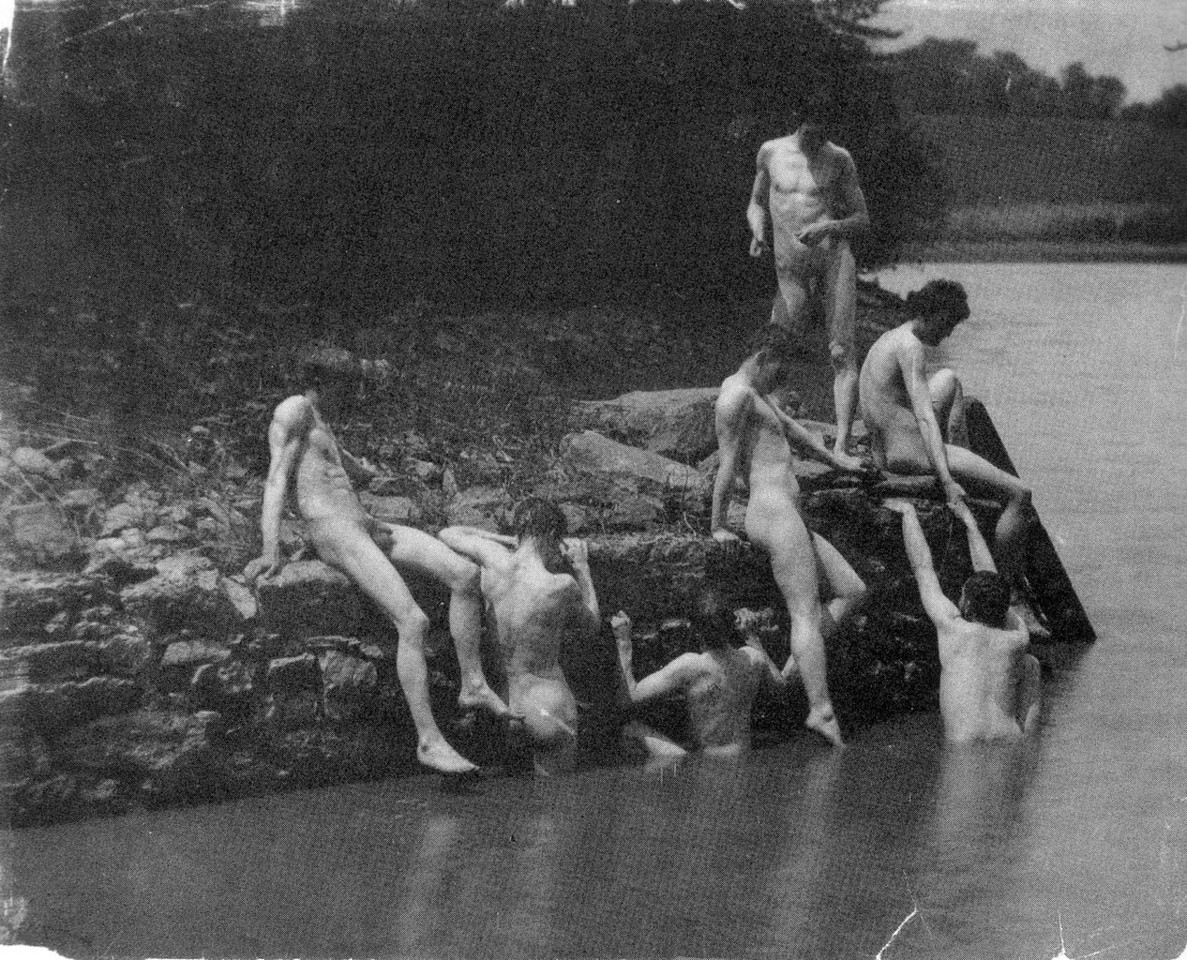 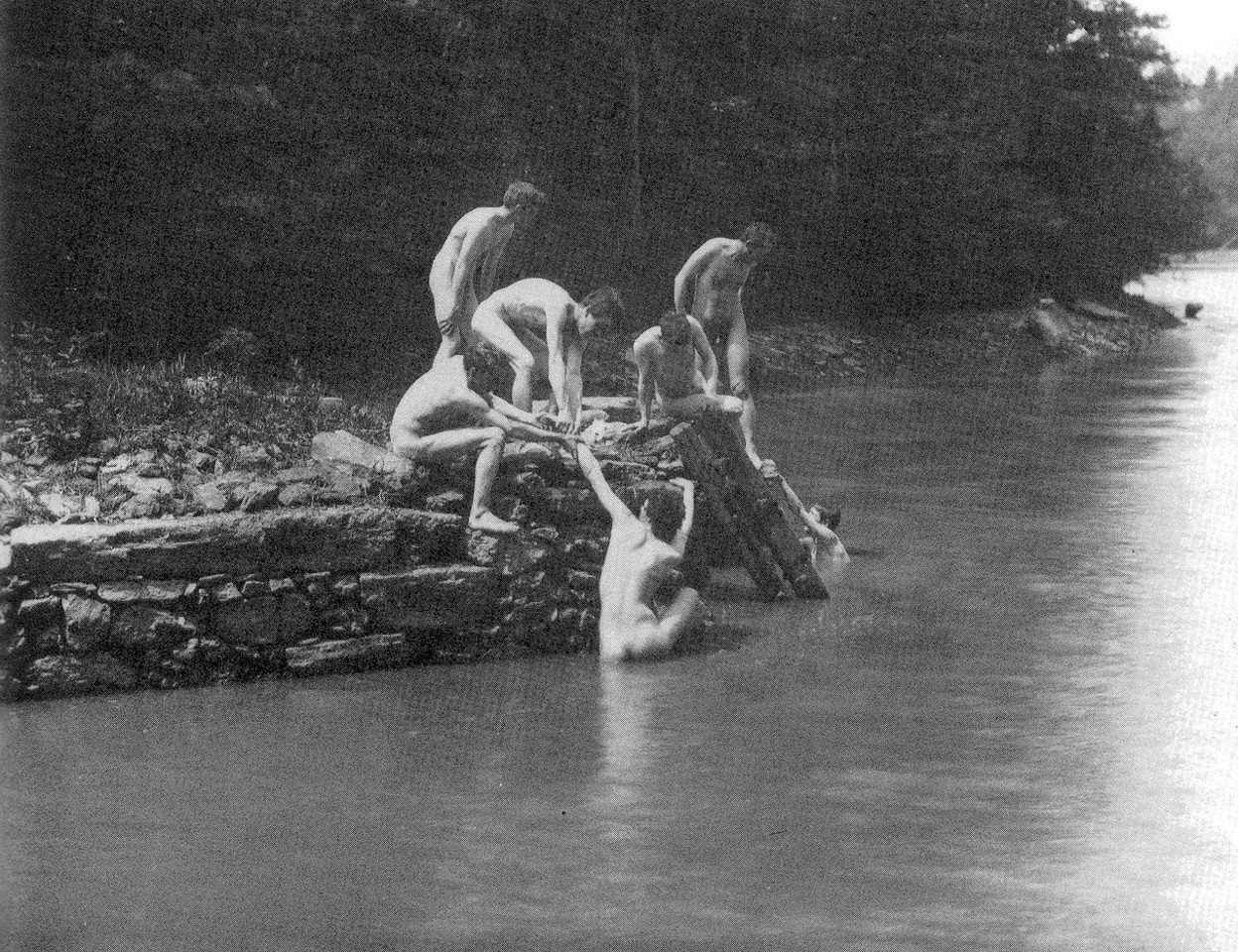 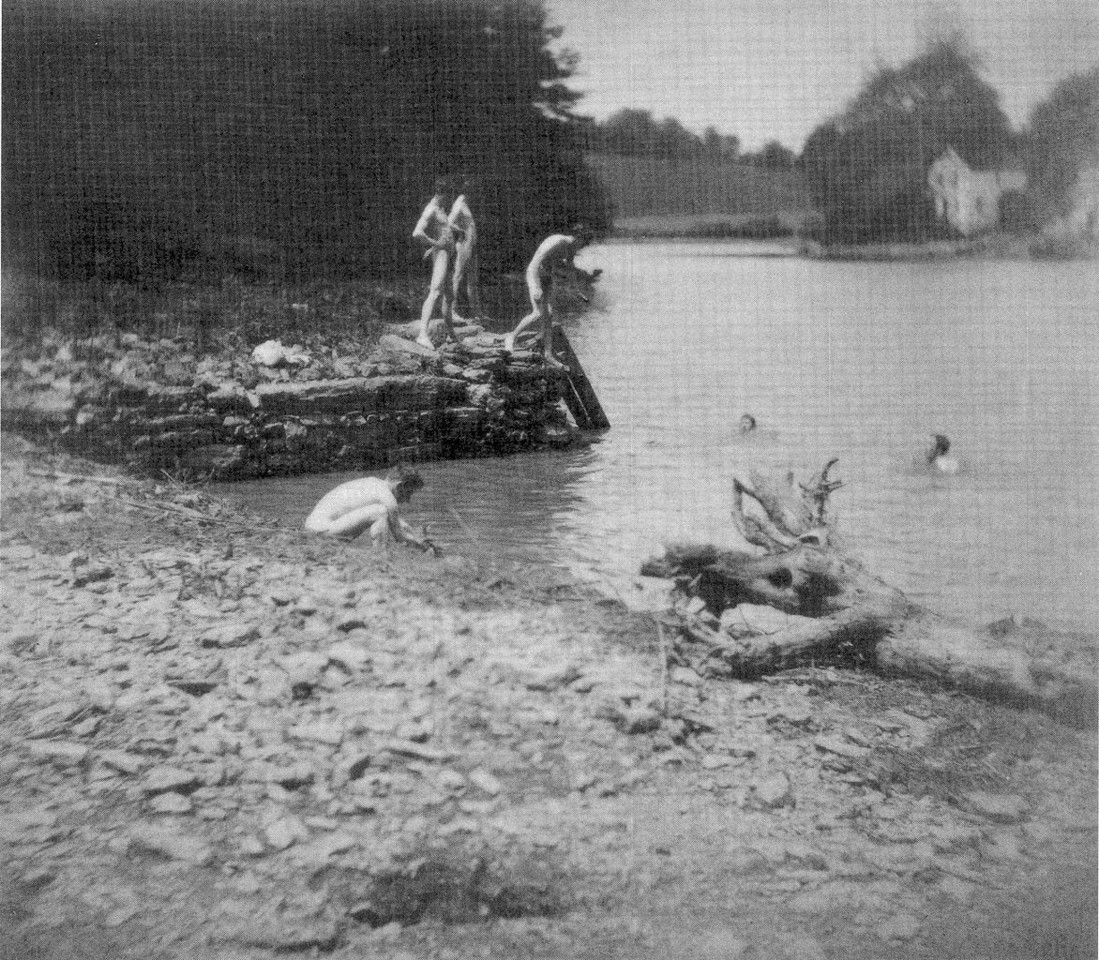 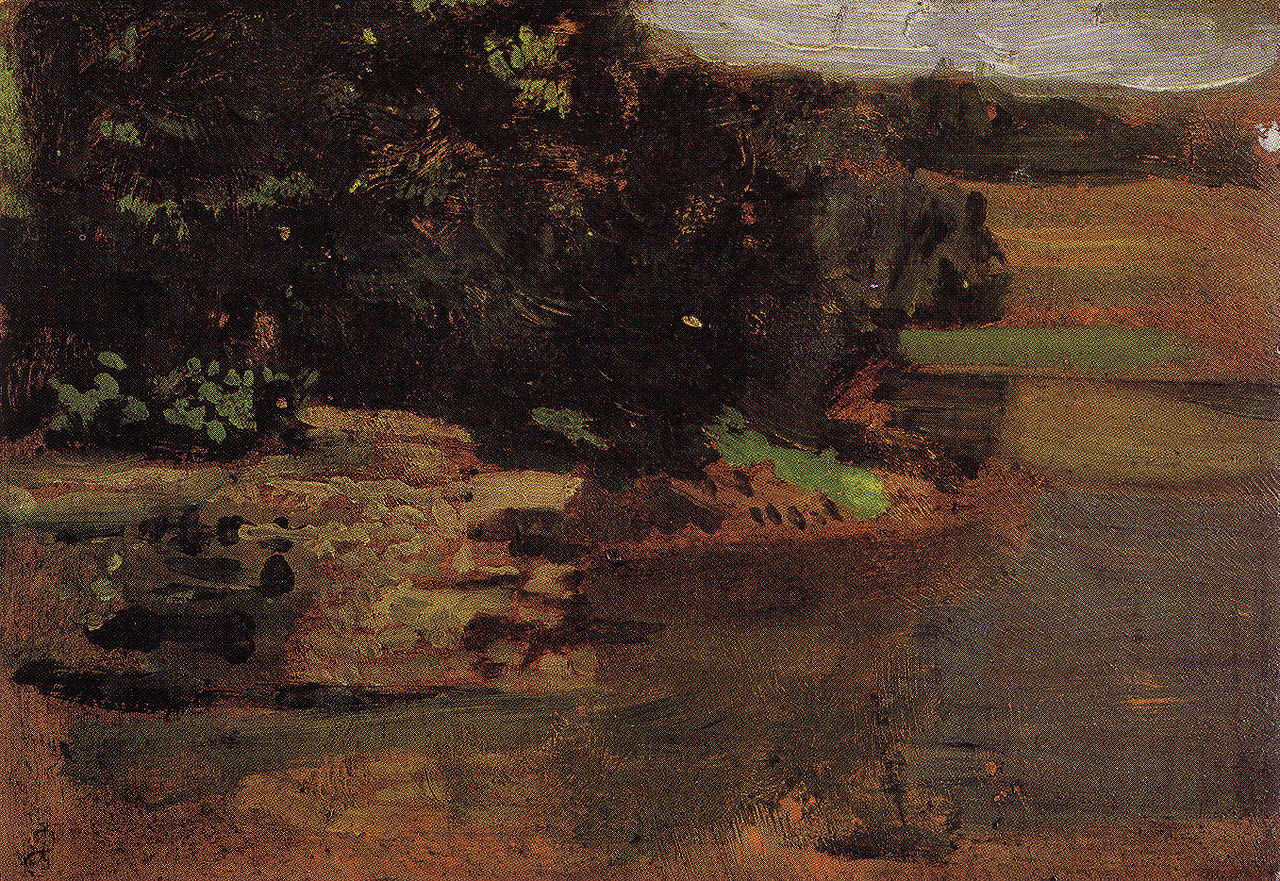 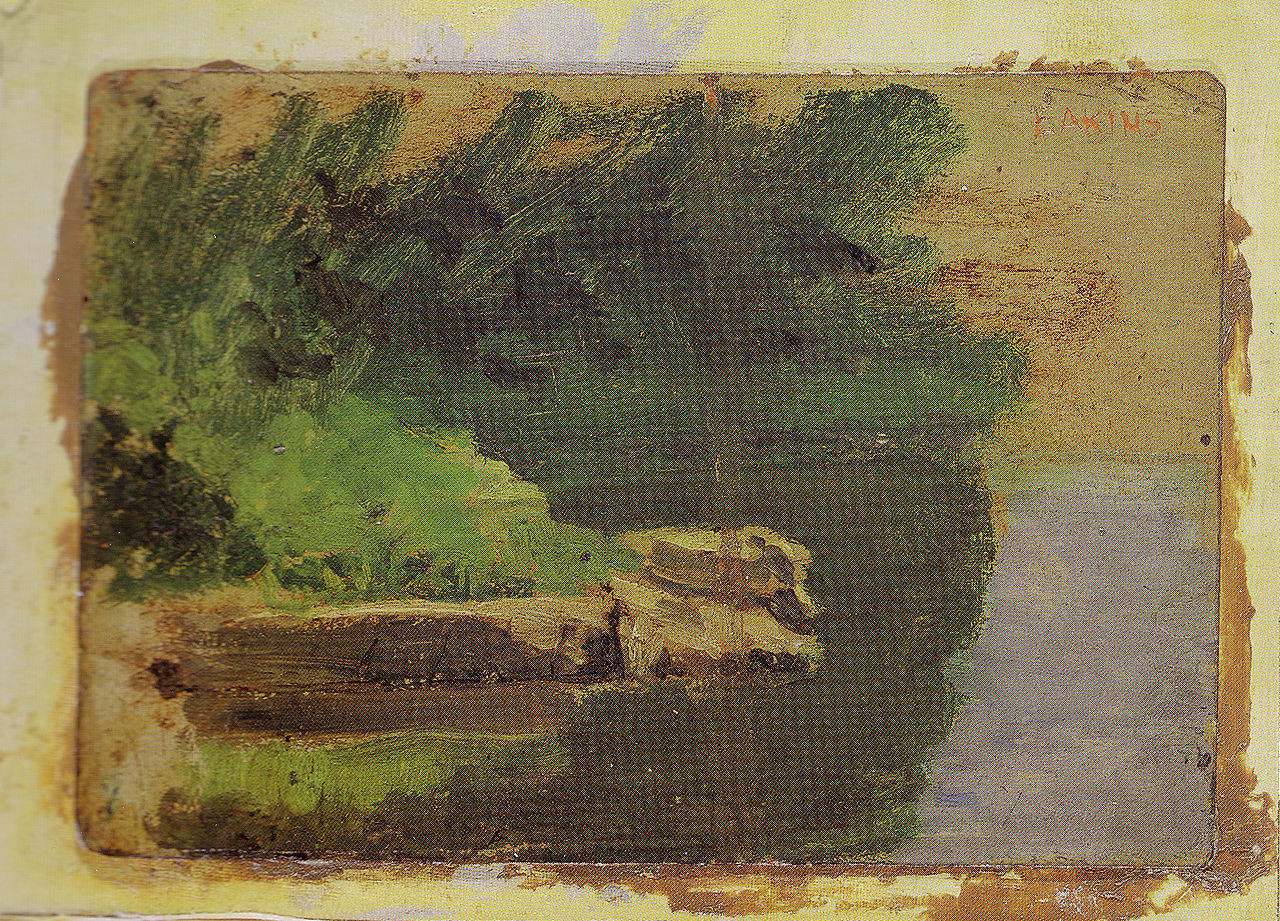 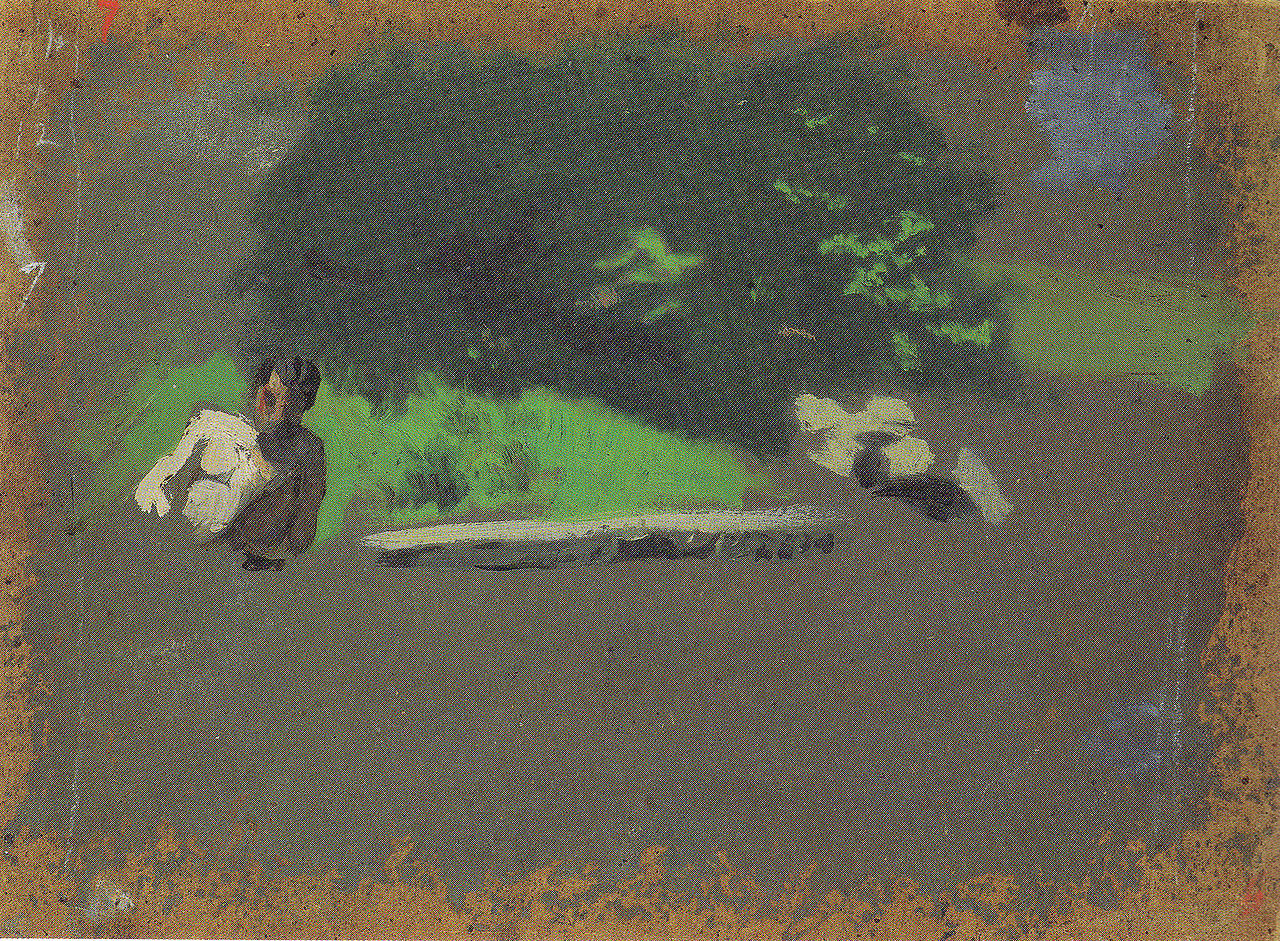 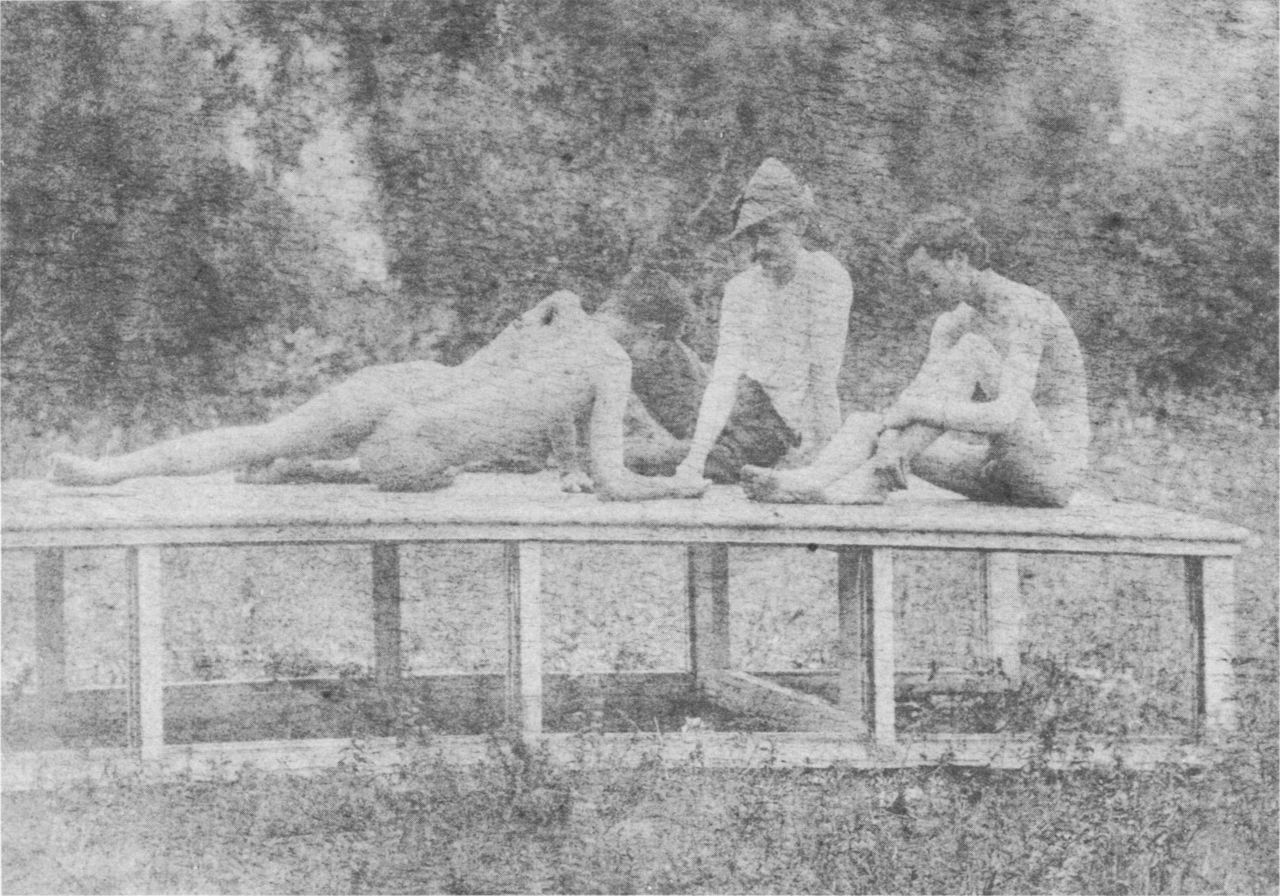 An Eakins photograph from 1883, discovered in 1973. "The scene with the three men on a platform may show the setting up of a pose—possibly for the reclining figure in The Swimming Hole." 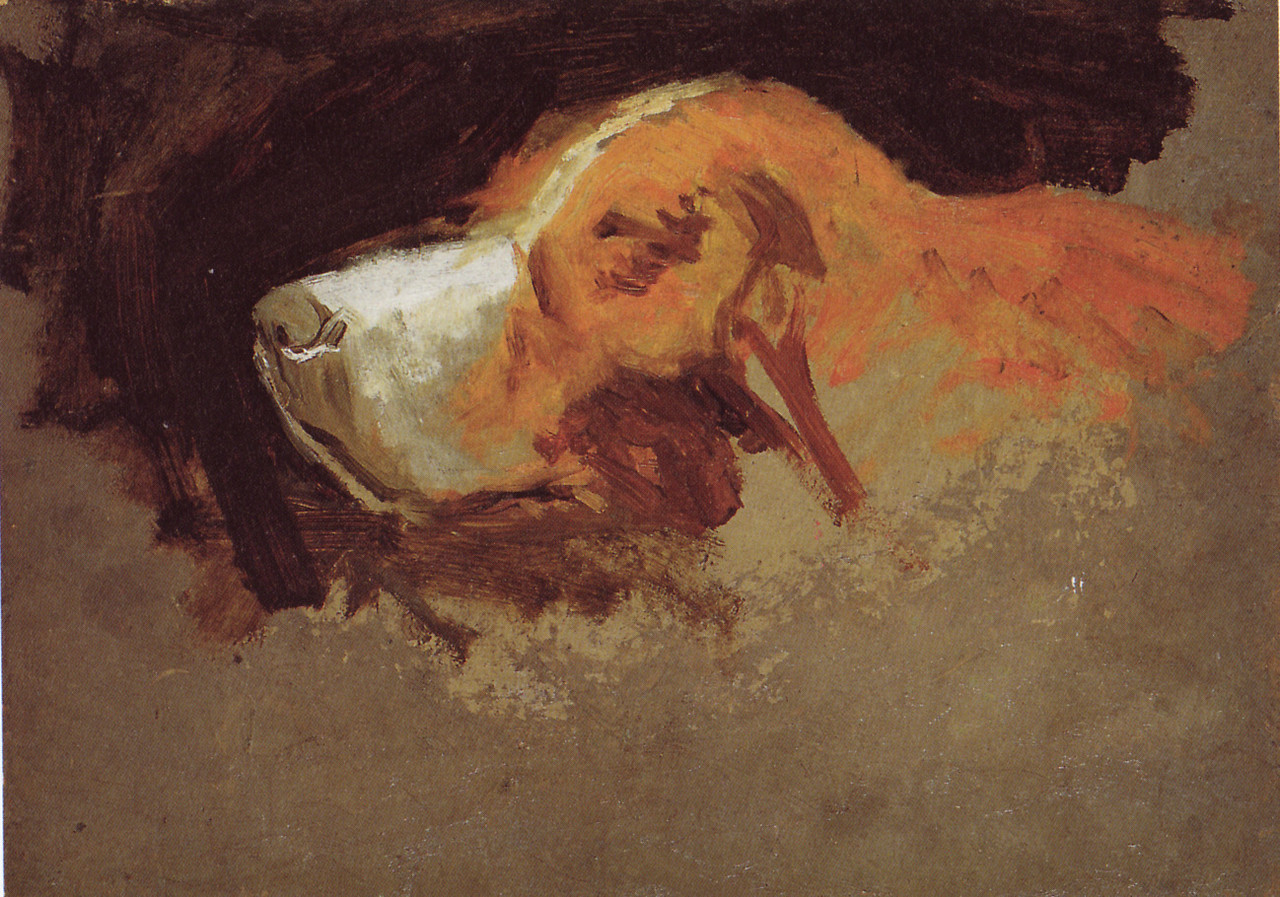 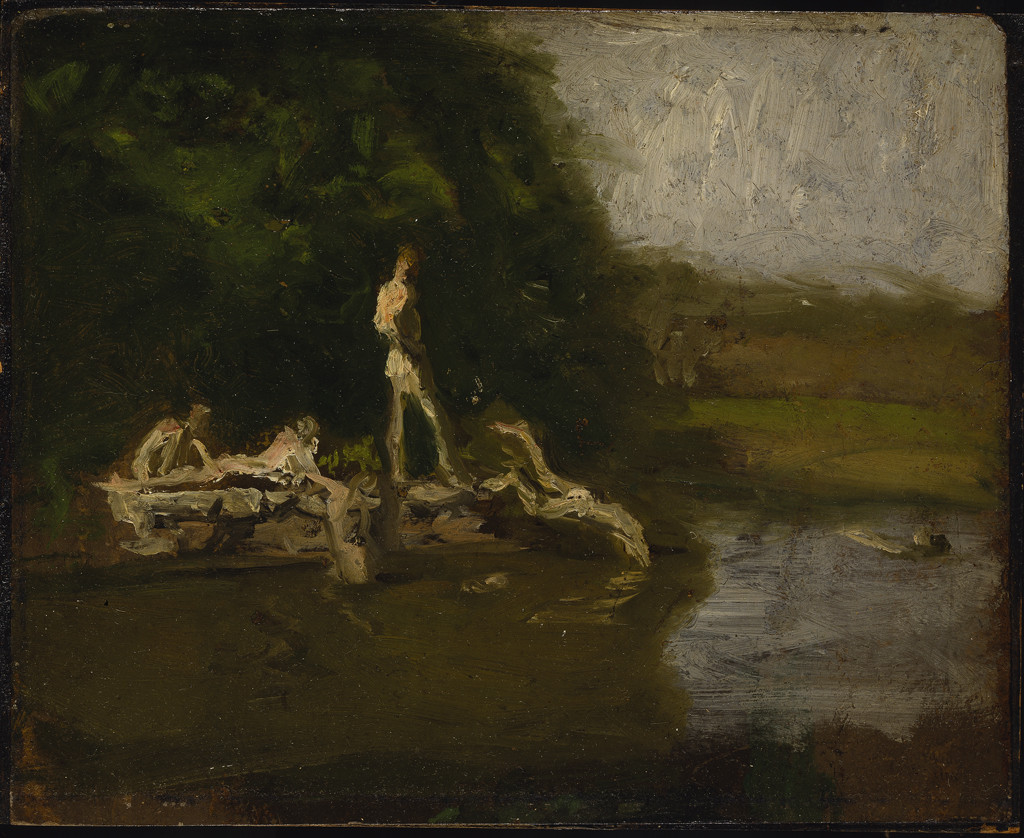 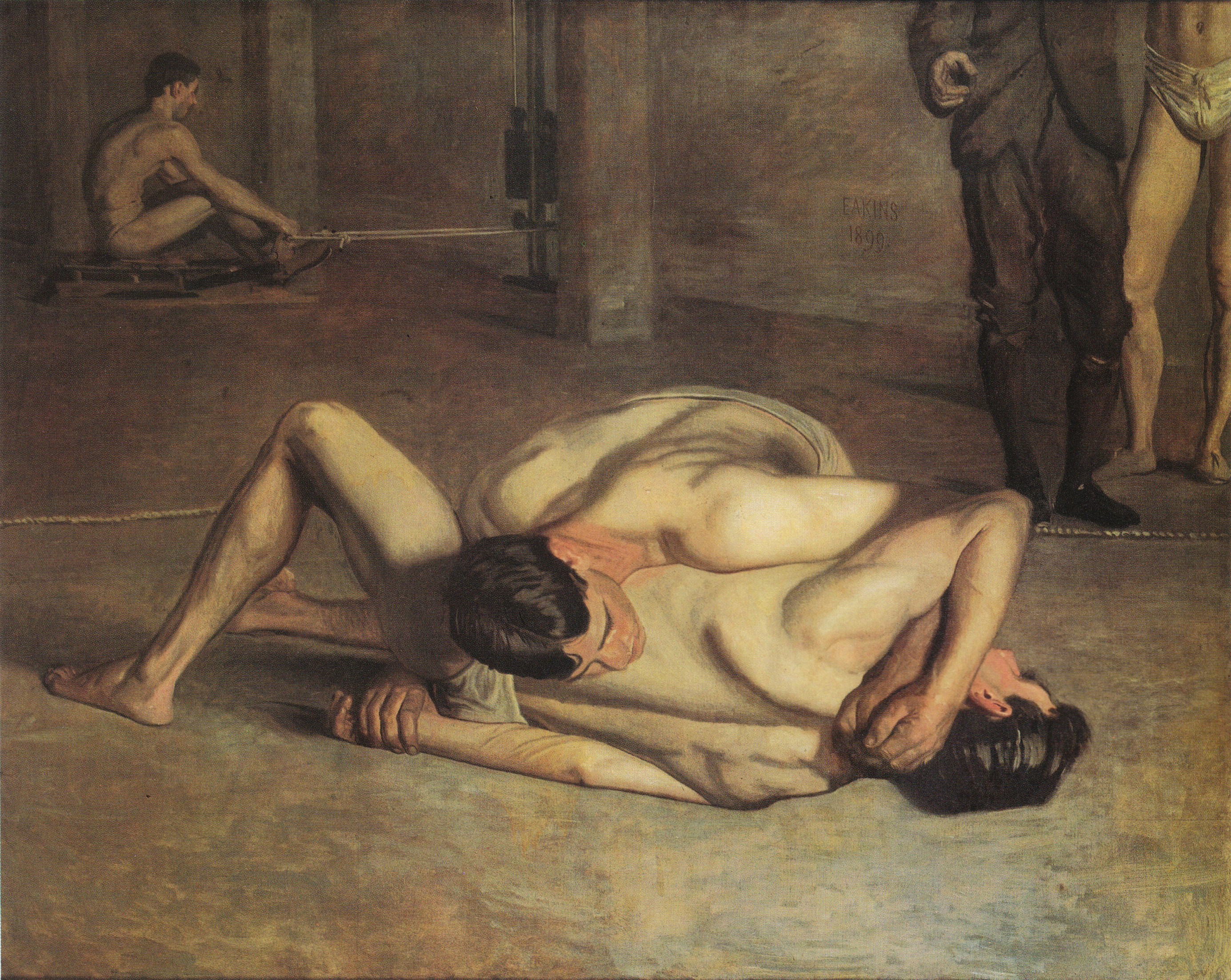 Wrestlers is Thomas Eakins's last completed genre painting, his last consideration of the male nude, and his last sporting picture. Considered in the trajectory of his career, from his first studies of the figure as a student and first rowing pictures completed in 1870, Wrestlers stands as a superb summation of some of the most significant themes of his career.

Thomas Eakins is considered one of the two greatest Realists of American painting in the nineteenth-century; the other is Winslow Homer. While Homer concentrated on rural themes, and ultimately on the relationship of humanity to nature, Eakins painted people. Although he was a portrait painter of great psychological depth, his primary focus was the body, the human being embodied in his or her physical reality. Not surprisingly, he was a famous and important academic teacher, proselytizing the study of anatomy and the use of live models for drawing. As such, he stands as the first American artist to base his art on the close and exacting analysis of the body, and is the fountainhead for a Realist tradition which extends from him through Robert Henri and the Ashcan School, to Reginald Marsh, Fairfield Porter, and Philip Pearlstein.

Upon his return to his hometown of Philadelphia in 1870, after training with Jean-Léon Gérôme at the Ecoles des Beaux-Arts in Paris, Eakins concentrated on subjects that conveyed and celebrated the character of his native city, all of them portraits but many of them showing friends and family in different activities. His goal, as the art historian Elizabeth Johns has observed, was to capture and extol the "heroism of modern life," as the avant-garde Impressionists had done for French painting and culture-and to reclaim for Philadelphia a central position in the ongoing cultural life of the post-Civil War American nation. Eakins was also a teacher at his alma mater, the Pennsylvania Academy of the Fine Arts, and introduced a new rigor into the curriculum of the oldest art school in the country. Increasingly, in both his painting and teaching, he concentrated on the male figure, finding ways to depict the male nude within a contemporary or historical context.

In 1898, Eakins began a group of paintings of sporting scenes, focusing on interior sports-boxing and wrestling. Eakins began Wrestlers by having two athletes wrestle for him so that he could work out which position was most interesting. His friend, Clarence Cranmer, a journalist, asked Joseph McCann, a boxer, and another athlete, to Eakins's studio toward the end of May 1899, where Eakins photographed them in action. Having decided on the pose-"the winning position, with a half nelson and crotch hold" as Cranmer described it-Eakins had the two men recreate it more formally and photographed them from the angle he would use in the final work.

After a first version, left unfinished, Eakins produced a small sketch for the whole composition, which has been in LACMA's collection for decades. The additions in the sketch and the final work move the painting in a new and much more complicated direction. Whereas the unfinished, early version was simply a complex study of bodies in motion, in the final version the painting becomes as well a statement about how one learns to make art, an exposition of Eakins's philosophy as a teacher and artist. In the left background is a figure of an athlete exercising, seated at a rowing machine, getting in shape for the contest to come; in the right are a coach and student. Basically all we see of them are their legs and the coach's right hand as he points to the pose the two wrestlers have taken. Perhaps Eakins is saying that learning to wrestle is a matter of getting the body in shape and the mind instructed. Mind and body must work together. Beside the coach's hand, prominently inscribed on the wall, are Eakins's signature and the date: Eakins underscores the connection between the work he has made and the scene depicted, between the artist and the coach. Both are elucidating the process by which a student learns his craft. As an artist, then, the heart of what one must learn is how to depict the human body in action, how to be an anatomist and an artist together. Such a philosophy puts Eakins more squarely in the academic tradition than any other major American artist. In some senses, then, the painting is deeply conservative. But its essential modernity is announced in subtle ways: the abrupt excision of the bodies of the coach and student by the picture frame, so that only their legs and lower torso remain; or by the peculiar space the rope on the floor charts. It is neither a straight nor angled line, nor even continuous. In the figures of the wrestlers themselves Eakins's careful contrasts of clothed and unclothed, wrinkled and taut flesh, and the angles of the arms and legs suggest the studied artificiality of how he has reconsidered what he has seen.

Eakins's deep conviction that the human being is the central concern of painting, and that the human being is composed equally of mind and body, is what made him influential to his younger colleagues and later generations. Wrestlers is Eakins last completed statement on the subject, a testament to a lifetime of teaching and painting, wrestling with the dilemmas of representation and embodiment. In this vein, the painting is also very much a spiritual self-portrait of a frustrated artist toward the end of his career. Although the focus on two nude figures underscores Eakins's academic training, which extolled and elevated the human body in its most perfect state, the unusual composition suggests that Eakins intended the painting to be much more than a literal representation of a new popular bourgeois spectator entertainment. In Eakins's best and most modern late paintings, he compelled the viewer to look and think again and again about what is presented. Often the general effect for the viewer of the most probing late paintings is a feeling of discomfort. This was intentional as Eakins himself was in the midst of many personal, familial, and professional problems. The unresolved issues of Wrestlers thereby echo Eakins's own life. 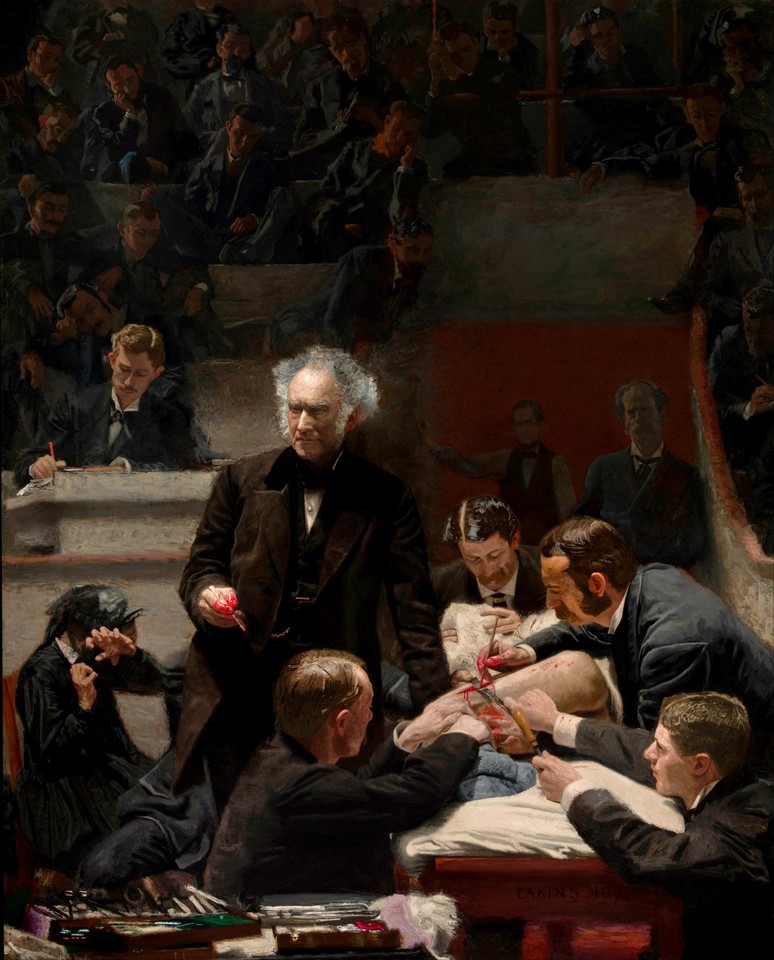 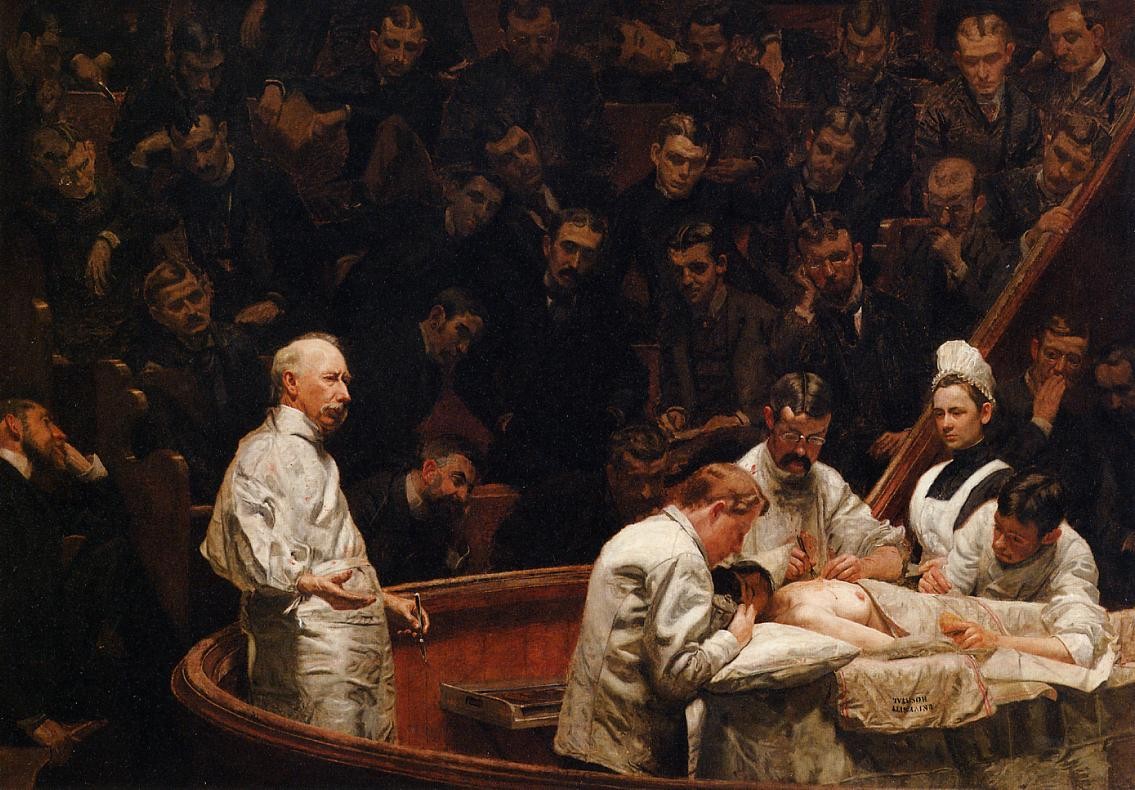 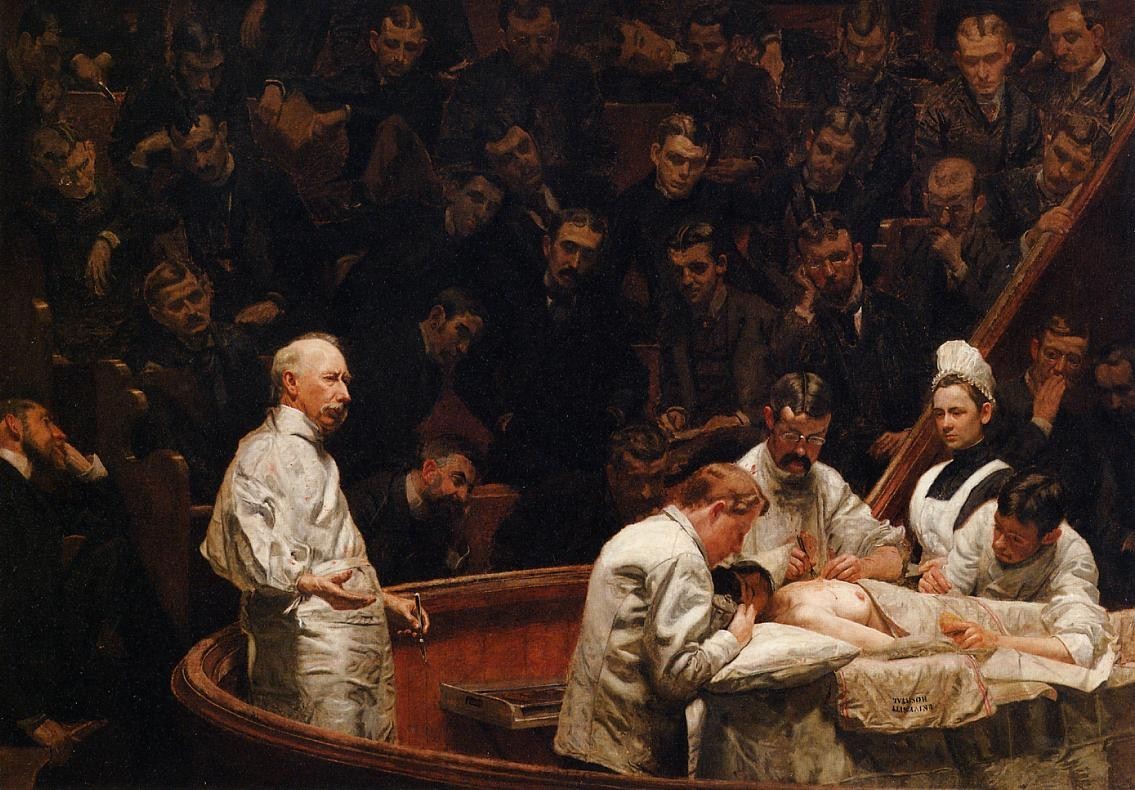 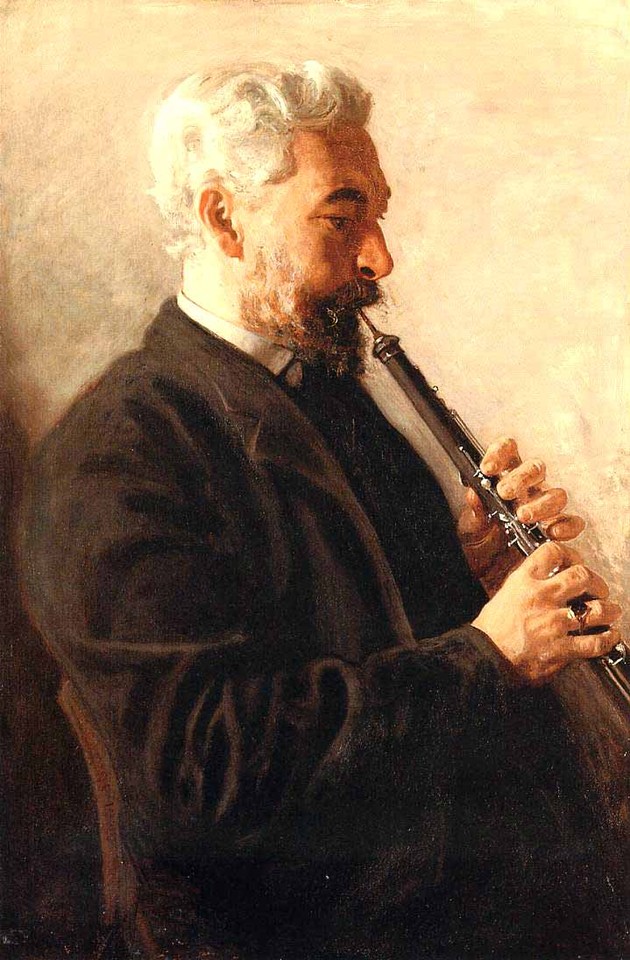 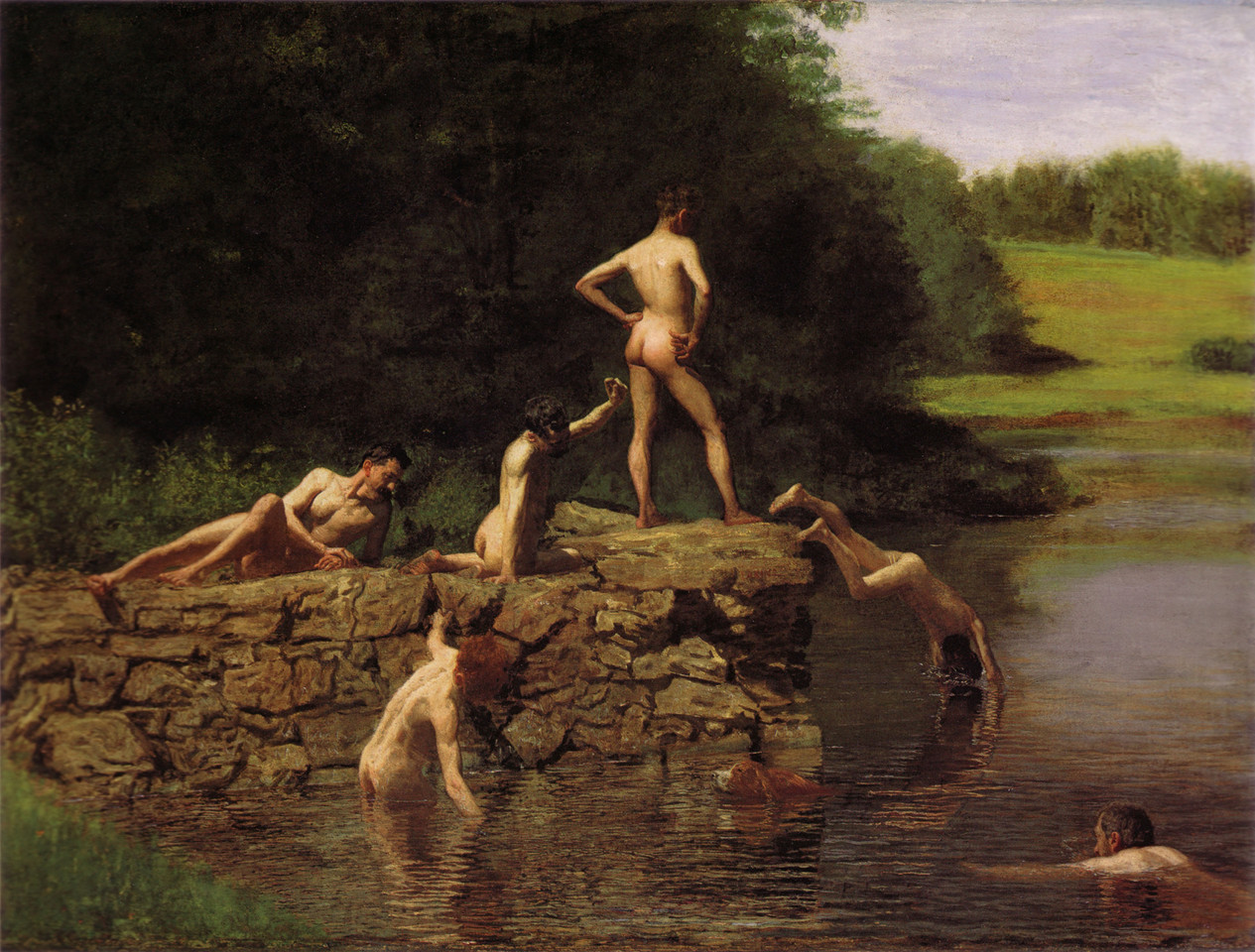