Coming just in time for Christmas.

It's the first day of spring 2001, and Maxine Tarnow, though some still have her in their system as Loeffler, is walking her boys to school . Yes maybe they're past the age where they need an escort, maybe Maxine doesn't want to let go just yet, it's only a couple blocks, it's on her way to work, she enjoys it, so? This morning, all up and down the streets, what looks like every Callery Pear tree on the Upper West Side has popped overnight into clusters of white pear blossoms. As Maxine watches, sunlight finds its way past rooflines and water tanks to the end of the block and into one particular tree, which all at once is filled with light.

"Doesn't suck," Zig agrees. The boys keep going, Maxine regards the tree half a minute more before catching up. At the corner, by reflex , she drifts into a pick so as to stay between them and any driver whose idea of sport is to come around the corner and run you over.

Sunlight reflected from east-facing apartment windows has begun to show up in blurry patterns on the fronts of buildings across the street. Two-part buses, new on the routes, creep the crosstown blocks like giant insects. Steel shutters are being rolled up, early trucks are double-parking, guys are out with hoses cleaning off their piece of sidewalk . Unsheltered people sleep in doorways , scavengers with huge plastic sacks full of empty beer and soda cans head for the markets to cash them in, work crews wait in front of buildings for the super to show up. Runners are bouncing up and down at the curb waiting for lights to change. Cops are in coffee shops dealing with bagel deficiencies. Kids, parents, and nannies wheeled and afoot are heading in all different directions for schools in the neighborhood. Half the kids seem to be on new Razor scooters, so to the list of things to keep alert for add ambush by rolling aluminum.

Bleeding Edge book trailer from The Penguin Press on Vimeo.

It is 2001 in New York City, in the lull between the collapse of the dot-com boom and the terrible events of September 11th. Silicon Alley is a ghost town, Web 1.0 is having adolescent angst, Google has yet to IPO, Microsoft is still considered the Evil Empire. There may not be quite as much money around as there was at the height of the tech bubble, but there’s no shortage of swindlers looking to grab a piece of what’s left... http://thepenguinpress.com/book/bleeding-edge/ 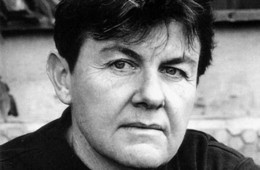 Born in California in 1945 and acknowledged as one of the most original voices in the contemporary landscape, Kay Ryan is the author of several books of poetry, including The Best of It: New and Selected Poems (2010), Flamingo Watching (2006), The Niagara River (2005), and Say Uncle (2000).

How anything
is known
is so thin—
a skin of ice
over a pond
only birds might
confidently walk
upon. A bird's
worth of weight
or one bird-weight
of Wordsworth.