All the complicated details
of the attiring and
the disattiring are completed!
A liquid moon
moves gently among
the long branches.
Thus having prepared their buds
against a sure winter
the wise trees
stand sleeping in the cold.

As movies seem to keep getting bigger and louder, filmmaker Jim Jarmusch still sets his own pace. In his latest, a bus driver makes his daily route through the streets of Paterson, New Jersey, taking in the stuff of everyday life to write poems. Jeffrey Brown talks with Jarmusch and poet Ron Padgett, who composed poems for the film.

William Carlos Williams - Sonnet in Search of an Author

Nude bodies like peeled logs
sometimes give off a sweetest
odor, man and woman

under the trees in full excess
matching the cushion of

Might be made of it! odor of excess
odor of pine needles, odor of
peeled logs, odor of no odor
other than trailing woodbine that

I lie here thinking of you:—

the stain of love

is upon the world!

it eats into the leaves,

the horned branches that lean

against a smooth purple sky!

There is no light

that drips from leaf to leaf

and limb to limb

of the whole world—

you far off there under

the wine-red selvage of the west!

Go to sleep--though of course you will not--
to tideless waves thundering slantwise against
strong embankments, rattle and swish of spray
dashed thirty feet high, caught by the lake wind,
scattered and strewn broadcast in over the steady
car rails! Sleep, sleep! Gulls' cries in a wind-gust
broken by the wind; calculating wings set above
the field of waves breaking.
Go to sleep to the lunge between foam-crests,
refuse churned in the recoil. Food! Food!
Offal! Offal! that holds them in the air, wave-white
for the one purpose, feather upon feather, the wild
chill in their eyes, the hoarseness in their voices--
sleep, sleep . . .

Gentlefooted crowds are treading out your lullaby.
Their arms nudge, they brush shoulders,
hitch this way then that, mass and surge at the crossings--
lullaby, lullaby! The wild-fowl police whistles,
the enraged roar of the traffic, machine shrieks:
it is all to put you to sleep,
to soften your limbs in relaxed postures,
and that your head slip sidewise, and your hair loosen
and fall over your eyes and over your mouth,
brushing your lips wistfully that you may dream,
sleep and dream--

A black fungus springs out about the lonely church doors--
sleep, sleep. The Night, coming down upon
the wet boulevard, would start you awake with his
message, to have in at your window. Pay no
heed to him. He storms at your sill with
cooings, with gesticulations, curses!
You will not let him in. He would keep you from sleeping.
He would have you sit under your desk lamp
brooding, pondering; he would have you
slide out the drawer, take up the ornamented dagger
and handle it. It is late, it is nineteen-nineteen--
go to sleep, his cries are a lullaby;
his jabbering is a sleep-well-my-baby; he is
a crackbrained messenger.

The maid waking you in the morning
when you are up and dressing,
the rustle of your clothes as you raise them--
it is the same tune.
At table the cold, greeninsh, split grapefruit, its juice
on the tongue, the clink of the spoon in
your coffee, the toast odors say it over and over.

The open street-door lets in the breath of
the morning wind from over the lake.
The bus coming to a halt grinds from its sullen brakes--
lullaby, lullaby. The crackle of a newspaper,
the movement of the troubled coat beside you--
sleep, sleep, sleep, sleep . . .
It is the sting of snow, the burning liquor of
the moonlight, the rush of rain in the gutters packed
with dead leaves: go to sleep, go to sleep.
And the night passes--and never passes--

William C. Williams - Landscape With The Fall of Icarus

a farmer was ploughing

of the year was

the edge of the sea

sweating in the sun

a splash quite unnoticed 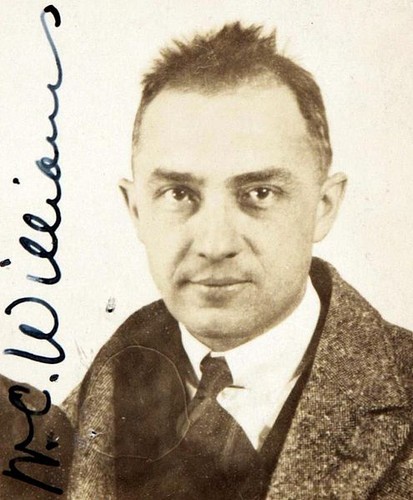 No one was ever going to be in a position to tell me what to write, and you can say that again. No one, and I meant no one (for money) was ever (never) going to tell me how or what I was going to write. That was number one...

I wasn't going to make any money by writing. Therefore I had to have a means to support myself...for I didn't intend to die for art nor to be bedbug food for it...

It was money that finally decided me. I would continue medicine, for I was determined to be a poet; only medicine, a job I enjoyed, would make it possible for me to live and write as I wanted to. I would live: that first, and write, by God, as I wanted to if it took me all eternity to accomplish my design. My furious wish was to be normal, undrunk, balanced in everything. I would marry (but not yet!) have children and still write, in fact, therefore to write. I would not court disease, live in the slums for the sake of art, give lice a holiday. I would not "die for art," but live for it, grimly! and work, work, work (like Pop), beat the game and be free (like Mom, poor soul!) to write, write as I alone should write...